- Why do I get the feeling that a lot of you are using Facebook as a substitution for prescription meds? (MY STATUS IS BADDEST)

- Life is filled with people who either take too much medication or not enough. (Julie Ann)

- I only tip cows if their service is outstanding. (Jack Olivar)

- Does it make you uncomfortable that I wear your profile pic in a locket around my neck? (Toni Daniels)

-I have never lowered a pair of mini-blinds evenly, not even one time...How the hell do they expect me to raise these children? (Lee Greenspan)

- Don't you hate it when the person you're Facebook-stalking never updates anything? (Tom William)

- Good Morning: You, my friends are the reason I wake up every morning ♥ LOL JK, I have to pee. (Julie Ann)

- Alright. Everybody calm down and quit panicking. I have a ham. (Dorraj Koob)

- I hate it when I'm taking a shower and the door opens and they're all "Get out of my house!" (Jodi Ann)

- I hate that awkward moment when you see a 3rd grader with a better phone than you. (Chris Batchelor)

- I hope that Jessica Biel has a son someday and names him Batmo. (Angie Granheim)

- I think if a movie is ever made about my life a good title for it would be, "Yes, it's a mustard stain. So?" (Donny Norris)

- I wish someone would write a movie about my life. I think "Pretty In Mayonnaise" would be a good title. (SamGirl Sunday)

- Today was one of those days where, if I had Tourette's, no one would've noticed the difference. (Danny Coleiro)

- I'm so glad none of my friends are smart enough to find this page! (Alicia Smith)

- I don't mean to be negative but - (SamGirl Sunday) 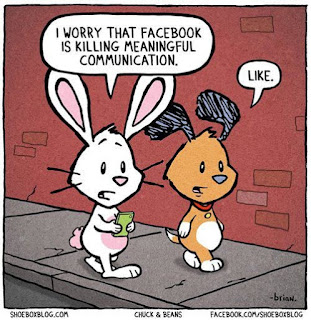 Visit my FACEBOOK PAGE tomorrow for more vintage status updates! Or, don't. But please do! I mean, you know, whatever. Please love me.

- My kids don't have Facebook, so I will never know when their birthdays are. (Todd Landon Wildig)

- I fold down my laptop screen very slowly at night so I don't squish you guys. (Harley Quinn)

- I am more excited to see my suitcase come down the luggage carousel at an airport than I am to see most people. (Karanbir Singh Tinna)

- I just drew a jelly smile on my toast with a squeeze bottle but I still don't believe it is happy. (Donny Norris)

- It's amazing how many opinions you can form about a person based on the way they drive. (Mike Seriously)

- Women seem to want security. At least that's what they yell whenever I approach them. (Steven Nibur)

- I like to start conversations with "zymurgy", so that if it becomes an argument I can be 100% certain that I've already had the last word. (Danny Coleiro)

- If you write "Happy Birthday" on someone's Facebook wall with no exclamation mark, I'm afraid you have no soul. (MY STATUS IS BADDEST)

- I just wiped a tear from my cheek. Or maybe it was pee. (Lisa James)

- I suggested to my coworker that we meet in the break room and play a game of rock, paper, scissors to decide who has to stay late to work on a project today. He showed up unarmed so either he is about to forfeit or he misunderstood me but I'm about to stab him anyways. (Donny Norris)

- I just open-hand slapped a dude, but it's cool, he was wearing Crocs. (William Hale)

-Sometimes it's just easier to cover the problem's mouth with a rag until it stops moving. (Toni Daniels)

- *nodding head* Oh, I understand now! ~ me not understanding anything that you're saying (Tim TheStache)

- Just because someone says mean things to you and acts like they're better than you, that's no reason to be rude back to me. (William Hale)

- If I were a sex symbol it would probably be the "less than" symbol. :< (Mike Seriously)

- The awkward moment when you’re trying to get over someone you never even dated. (Shafique Khatri)

- I'm filming a compelling new series about the ongoing struggle women have with freezing cold feet. It's a sockumentary. (Toni Daniels)

- I should be able to park in an “expecting mother” parking space if am waiting for my mom, right? (Ben Iz Bshop)

- When I get multiple friend requests on MySpace, my pager goes crazy. (Jennifer Holmes Hallman)

- Nothing makes me more nervous than receiving a FB notification after the weekend that says, “You have been tagged in a photo". (Shafique Khatri) 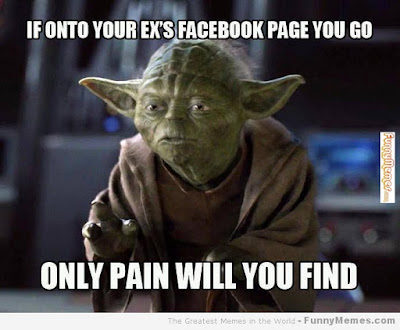 If you liked these, make sure you visit my Facebook Page, hover over the "liked" button at the top of the page and set it to "See First" under "Posts In News Feed". I'll post another tomorrow!