Email ThisBlogThis!Share to TwitterShare to FacebookShare to Pinterest
Labels: videos

____ is wondering if its cool in China to get English words tattooed on their arms.
____ is elegant, yet approachable; peppery with a cherry aroma and hints of chocolate, rounded out by a great balance of oak & tannins.
____ The leaves and my serotonin levels are falling.
____ thinks that makeup can make you prettier on the outside, but it doesn't help if you're ugly on the inside. Unless you eat the makeup.
____ thinks that this turn of events has filled me with a profound sense of indifference.

These newspaper ads were brought to you by the letters W, T and F. 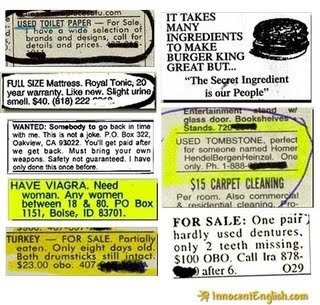 Email ThisBlogThis!Share to TwitterShare to FacebookShare to Pinterest
Labels: WTF

Can't think of an update? None of my crap is good enough for you? Quote someone else.

____"All men are frauds. The only difference between them is that some admit it. I myself deny it." —H. L. Mencken
____"Those who believe in telekinetics, raise my hand."—Kurt Vonnegut
____ "You have a cough? Go home tonight, eat a whole box of Ex-Lax, tomorrow you'll be afraid to cough."- Pearl Williams.
____ "The greatest thing about Facebook, is that you can quote something and totally make up the source.”– George Washington

Email ThisBlogThis!Share to TwitterShare to FacebookShare to Pinterest
Labels: FUNNY QUOTES, People smarter than you

Halloween Facebook Status updates for you, free of charge.

____ wanted to dress as a turn signal for Halloween, but apparently nobody in my city knows what the hell that is.
____ thinks that Police departments should be required every Nov 1 to post mug shots of people arrested in their Halloween costumes.
____ Reason #67 that I had children: I get to play "candy inspector" after Trick-Or-Treating on Halloween. I deserve the best candy.
____ has yet to decide what I'm going to be for Halloween other than drunk.
____ If you have to tell people that you're a ninja for Halloween, then your ninja costume sucks.
____ My neighbor was dressed up like a ghost, sheet faced and full of boos.
____ wishes that I was the type of person who had the foresight to plan an awesome Halloween costume.
____ this Halloween. I'm going to be a banker. I'll eat all my candy, all yours, then convince the government that if I don't get more candy we'll all starve.
____ wants to remind you this Halloween, that as a general rule, don't solve riddles that open portals to Hell.
____ likes to buy bags of Halloween candy and boxes of razor blazes just to see the look on the cashier's face.
____ That cauldron of Halloween candy has been undressing me with its eyes from across the room all night...come here you.
____ hopes nobody else dresses up as Justus von Liebig, Father of biochemistry who recorded minerals in plant ash and proposed the law of minimum.
____ thinks that Larry King, asleep on my porch, would be one hell of a Halloween decoration.
____ This year's least popular Halloween candy will probably be, as always, Reese's Feces.
____ May the bits of me that hang out of my costume not cause you to throw up your festively colored beverages this all hallows eve!

What in the hell? Corndog lipbalm. 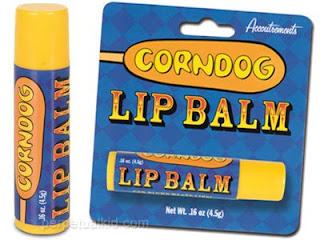 CORNDOG LIPBALM. That is all.

Email ThisBlogThis!Share to TwitterShare to FacebookShare to Pinterest
Labels: WTF

Do you long to be the envy of all who dare to read your facebook status?

Go, now, readers! Change the world one status update at a time!

Caffeine, glorious caffeine:
____'s cheerful disposition is brought to you today by a strong cup of coffee.
Grammar:
____ thinks if you still don't know the difference between your and you're, well then your just dumb!
An oldie, but a goodie:
____ Give a man a match, and he'll be warm for a minute, but set him on fire, and he'll be warm for the rest of his life.
On stuff that isn't fun:
____ has had fun before. This isn't it.
Cleaning sucks:
____ thinks that a clean house is a sign of a misspent life.
Sarcasm:
____ Oh, you hate your job? Why didn't you say so? There's a support group for that. It's called EVERYBODY, and they meet at the bar.