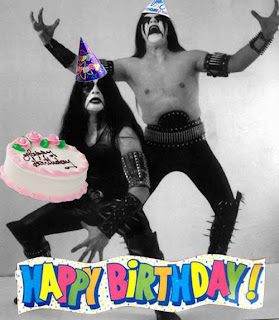 ____ Happy Birthday to someone I would donate some non-essential organs to.
____ hopes your tiny, soul-sucking cubicle provides you a warm atmosphere in which to celebrate your birthday.
____ hopes your birthday sucks less than mine did.
____ couldn't fit all the letters on the cake, so it just says "Happy Birthday, Assho." Hope that's cool.
____Actually, I didn't forget your birthday, but since you forgot mine I waited until a day after to send this.
____ is glad I live so far away that your birthday requires almost no effort on my part.
____ Happy Birthday even though I tried to kill you all those times when we were kids.
____ Birthday, n.; Anniversary of one's birth, observed only by men and children.
____ the fact that a Facebook reminder told me it was your birthday doesn't make it any less special.