Excited to be back at work today? Some work-related Facebook status updates to help you get in the spirit... 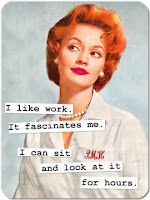