Happy Friday! You've worked hard all week, and frankly, you don't feel witty or clever enough to come up with a status update. Help is here!

Sloth:
____ is too exhausted from planning to work out to actually work out.
The Office (TV show):
____ can't figure out who in the hell this girl is that people keep quoting, and why everyone knows what she said.
Sarcasm:
____ has mastered the art of verbal combat and sarcastic witticism.
More sarcasm:
____ thinks that your incessant rambling goes perfectly with my terrible listening skills.
Even more sarcasm:
____ is not young enough to know everything.
Ego:
____ is perfectly delightful.
Crappy day:
____ as it turns out...disappointment DOES have a name.
I wish everyone was as smart as me:
____ thinks it's not the insanity that's the problem, it's the dim wittedness.
Gossip:
____ does not gossip, I emotionally speculate. 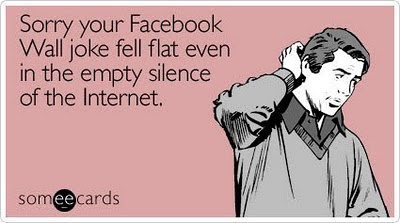