Oh, is it almost Valentine's Day? I hadn't noticed, what with the pink and red spew all over every store I walk into. Anyway, here's some Valentine's Day status updates.

____ loves you more today than I did yesterday. Yesterday you really pissed me off.
____ thinks that Valentine's Day is a stupid holiday, but I still want something...
____ All you need is love. And Valentine's Day is the perfect time to buy lots of things to prove it.
____ doesn't understand why Cupid was chosen to represent Valentine's Day. When I think about romance, the last thing on my mind is a short, chubby toddler coming at me with a weapon.
____ This year, I hope Cupid finds himself curled up in the fetal position in a pool of his own vomit.
____ Saint Valentine was eventually imprisoned, beaten, stoned, and beheaded. They don't tell you that on the cards.
____ is against flowers on Valentine's Day because what if disease-ridden bugs were nesting in them, longing to multiply worldwide? Not so romantic then, eh?
____ wants to know what Meatloaf WON'T do for love...
____ plans to treat Valentine's Day the same as all the other nights alone in my apartment.
____ A special message to all you lovers out there celebrating Valentine's Day... Take it inside.
____ wants my boyfriend/husband/girlfriend/wife to know we'd be a normal couple if it wasn't for you.
____ just wanted to tell my boyfriend/girlfriend on this Valentine's Day: I'm exceptionally thankful you lowered your standards enough to date me.
____ just wanted to remind you that yet another obligation to buy me something is right around the corner. 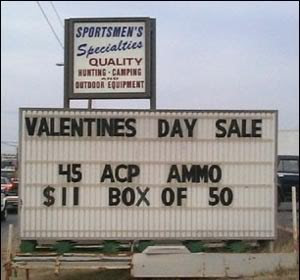