Interesting statistic about Facebook:
____ 50% of parents “friend” their children on Facebook. The other 50% find less technological ways to embarrass their kids.
Laziness:
____ thinks if nothing is impossible and I'm doing nothing, then I'm doing the impossible. (Kevin)
Bad day:
____ thinks that this morning, every side of the bed is wrong.
Funny George Carlin quote:
____ "I have lots of ideas. Trouble is, most of them suck."
Sarcastic play on words:

____ Sarchasm (n): The gulf between the author of sarcastic wit and the person who doesn't get it.
Duh:
____ just read that Movie Theater popcorn is unhealthy. In related news: Water is wet.
FYI: I grace my Facebook Fan page with a new update daily. Click HERE to become a Fan on Facebook! Want to share a funny, clever or witty Facebook status update? Do you have a funny one-liner you'd like to share? Send me an email at mystatusisbaddest@yahoo.com. I will publish those that my twisted mind enjoys. 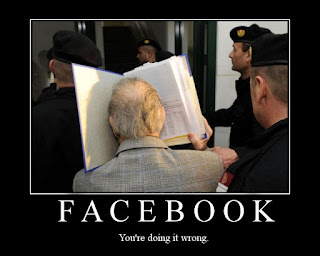