Facebook status updates about work:
____ Based on my current rate of income, I estimate that I could retire comfortably about 143 years after my death.
____ What does it mean to be productive? I will think about this question while sitting in my new, awesome manila folder igloo at work.
____ snuck a bunch of booze into work today using my stomach. (TIP: Don't use this one if your boss is your Facebook friend)
Facebook status update about Facebook:
____ gets disappointed every time I'm in the bank and it doesn't get robbed because I'd love to talk about that in my Facebook Status update.
Wanna sound smart?
____ Studies show it's okay for me to just say "studies show" in front of whatever I want to say and that makes it true. (from my FB FAN PAGE)
Pet peeves:
____ hates when people say "when all is said and done" when, in reality, they never stop saying things and doing stuff. (from my FB FAN PAGE)
Mistakes:
____ thinks that anybody can make a mistake. It takes real dedication to make all of them. 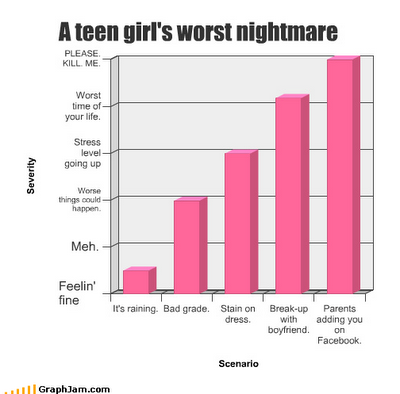 Facebook Status updates about Facebook:
____ Facebook has made it completely impossible to complain that you were unaware of your friend's birthday.
____ The best version of any given Facebook Status update is always the one you think of just after you post the original.
Google:
____ Google turned 12 this week, which means we only have one year left to use it. When it becomes a teenager, it won't answer anything. (from my FB Fan Page)
Trust:
____ Never trust anyone who says, "I'm not supposed to tell anyone but...."
Bad day?
____ thinks that if I could fly like a bird, I know who I'd poop on first.
____ Some days I feel like I only have two brain cells and they are too busy arguing for me to accomplish anything. (from my FB Fan Page).
____ the "parallel universe" version of me must be having a terrific day.
Math:
____ If I had a nickel for everytime someone asked if I was bad at math, I'd have $0.62 cents.

Become a FAN ON FACEBOOK and stroke my ego see new Facebook Status updates daily! Want to share a funny, clever or witty Facebook status update? Send me an email at mystatusisbaddest@yahoo.com. I will publish those that my twisted mind enjoys.

Facebook Status updates about Facebook:
____ They have tracking on Facebook so your family and friends know where you are? If I wanted them to know where I was I would answer my phone. (from my FB FAN PAGE)
____ Logging off Facebook is like trying to get away from the bar. It's always, "I'll just have one more..."
____ Rmbr – dooont updt yr staus whljik you driv. It is dngrou7s.
Ego:
____ Has anyone else noticed that mirrors look really sexy?
Random deep thought:
____ thinks it's interesting that the first half of your life, people tell you what to do. For the second half, they tell you what you should have done.
Getting along with others:
____ has decided that I will be a team player when I get paid like a pro athlete. (from my FB FAN PAGE)
Booze:
____ Anyone who says that alcohol is a depressant isn't drinking enough of it. (from my FB FAN PAGE)
____ does some of my best drinking when I'm drunk.
Work:
____ tries to cut down on the number of mistakes I make at work by coming in late.

Become a FAN ON FACEBOOK and stroke my ego see new Facebook Status updates daily! Want to share a funny, clever or witty Facebook status update? Send me an email at mystatusisbaddest@yahoo.com. I will publish those that my twisted mind enjoys.

Fan update:
____ is wondering why every energy drink on the planet glows in the dark and tastes like detergent. (thanks, Claudia Rode!)
Work/Sarcasm:
____ thinks that criticism of my job performance is welcome, as long as you go to hell afterwards.
Multitasking:
____ Updating my Facebook Status from the treadmill really isn't that diffic (from my FB FAN PAGE)
Knowledge:
____ thinks that when you don't know what you're talking about, it's hard to know when you're finished.
Rebellion:
____ When someone asks me to do something, often my instinct is to do the opposite. (from my FB FAN PAGE)
Drinking:
____ thinks that my liver just gave me two weeks notice.
Procrastination:
____ needs more time in the day to properly put off the thing I want to avoid doing.
Facebook + Drinking:
____ loves doing the “scroll of shame” the morning after drinking. That's when I walk through all the stuff I shouldn't have done on Facebook the night before. (from my FB FAN PAGE)

Couldn't find a status update you could use from this batch? I've been writing this blog for ALMOST A YEAR now, and have written thousands of status updates just for you. Look around my site for a bit and you are bound to find something that works!  Also, I grace my Facebook Fan page with a new status update DAILY, click HERE to become a Fan. Want to share a funny, clever or witty Facebook status update? Send me an email at mystatusisbaddest@yahoo.com. Thanks for stopping by!

Life is strange:
____ is beginning to feel like every day of my life is like an open tryout for a wacky new reality television show.
Generalizations:
____ thinks that you stereotypes are all alike.
People can be jerks:
____ doesn't think that certain people are a "waste of space". I just think their space could be better occupied by air. (from my FB Fan Page)
Laundry:
____ forgot to put an anti-static sheet in the dryer and now I'm afraid of my clothes.
Drinking/Being Drunk:
____ has been thinking a lot lately. Did I say "thinking"? I meant "drinking." (from my FB Fan Page)
____ drinks to make other people interesting.
____ thinks that if you eat a balanced breakfast, everything else is part of that balanced breakfast, including a bottle of vodka 13 hours later.
Funny Quote:
____ "I'd like to take a toothpick and throw it into a forest and say, 'You're home.'" -Mitch Hedberg 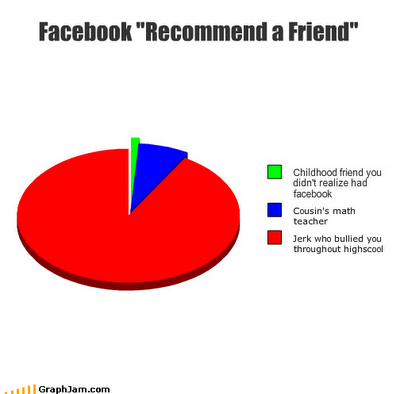 Laziness:
____ looked at my unmade bed this morning and decided it was art in another medium and I should not destroy it.
Good advice:
____ is going to have to start following my brain. My heart is clearly an idiot. (from my FB Fan Page)
Bad day?
____ feels like life isn't passing me by, it's trying to run me over.
Facebook Status update about Facebook:
____ Sometimes, I wish I could delete other people's Facebook Status updates. (from my FB Fan Page)
Mondays suck:
____ would complain more about Monday, but there is still the rest of the week to mess up everything.
Drinking:
____ Oh vodka, you know I can't stay mad at you!
____ If you're drunk and you know it, hand your claps. (from my FB Fan Page)
Exercise:
____ ran this morning and there was absolutely nothing chasing me.

I grace my Facebook Fan page with a new status update DAILY, click HERE to become a Fan! Want to share a funny, clever or witty Facebook status update? Send me an email at mystatusisbaddest@yahoo.com. Thanks for stopping by!

Facebook Status updates about FACEBOOK:
____ Don't cry because it's over. Smile because it happened to someone else and you have the photos you can upload and tag them in on Facebook. (from my FB Fan Page)
____ Sometimes likes to send Facebook Status updates from my phone just to make it look like I left the house today.
____ Facebook: Where people go to re-experience their childhood rejection & acceptance issues all over again.
Work:
____ thinks that some days going to work is like being waved into a way too enthusiastic conga line.
Procrastination:
____ thinks that procrastination has it's good side: You always have something to do tomorrow.
Fan update:
____ doesn't need to walk a mile in your shoes. I can see you're a train wreck from all the way over here. (thanks, Lori Anne Glassco!)
School/Sarcasm:
____Two things I love more than ANYTHING in this world: Going to class and being sarcastic.
"Chain emails"
____ It's 2010, people. Can we stop with the forwarding of emails threatening bad luck if they aren't forwarded to everyone we know? Thanks.
Sloth:
____ is so lazy today that I cant even finish a (from my FB Fan Page)
Rules:
____ will play fair when I get to make up the rules.

Of course, if you become a FAN ON FACEBOOK, you will stroke my ego see new Facebook Status updates daily. Want to share a funny, clever or witty Facebook status update? Send me an email at mystatusisbaddest@yahoo.com. I will publish those that my twisted mind enjoys. 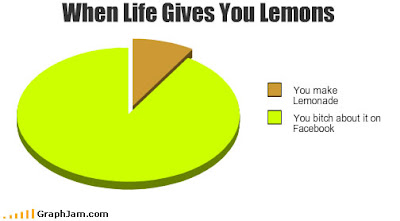 Hungover?
____ feels like Nick Nolte's mugshot.
____ is in that awkward phase of the day between never drinking again and noon.
____ thinks that the problem with being an drunken time traveller is not being able to remember a single thing about tomorrow.
Mistakes:
____ has learned that there are at least three different ways to end up with the same mistake.
Life is Good:
____ is feeling so good today, I'd like to ask you to high-five the person next to you and tell them it's from me.
Exercise (or lack of):
____ is counting the past 2 hours of lying on the couch *not* going to the gym as resistance training.
Bills:
____ isn't sure what's so "outstanding" about this bill? It seems pretty ordinary to me.
Productivity:
____ My list of things that I’ve accomplished today: 1. Accomplishments List.
Google:
____ is so dependent on the Google "Did you mean ____?" that I barely bother to spell anything even remotely correctly anymore.
Funny Quotation:
____ "Probably the toughest time in anyone's life is when you have to murder a loved one because they're the devil." -Emo Philips