____ is excited for Christmas. What other time of the year can you sit around a dead tree and eat candy out of socks?
____ just assumes that everyone on my Christmas list has been terrible. Makes things easier.
____ Dear Santa, I was framed.
____ Santa Claus: He knows when you are sleeping. He knows when you are awake. Sounds like Santa has Facebook.
____ thinks that if I keep this up, the Christmas miracle will be me getting my jeans buttoned.
____ It's beginning to cost a lot like Christmas.
____ Merry drunk! I'm Christmas!
____ While assuring children that Santa really does exist, I'm often quick to add "unlike you" just to keep them on their toes.
____ wonders that if Christmas, Father's Day and birthdays did not exist, then aftershave too, would not exist.
____ Just a reminder in these tough economic times that instead of spending five dollars on my Christmas card, you could just give me five dollars.
____ All I want for Christmas is you. Just kidding! I want a new car.
____ I've been bad a few times this year, but it was worth it...you judgmental fat bastard!
____ is starting to think that Santa just isn't that into me.
____ This holiday season, in lieu of gifts, I've decided to give everyone my opinion.
____ is dreaming of a white Christmas. But, if the white runs out, I'll drink the red.
____ tries to be unusually kind and compassionate to those around me during the Holidays, because I never know who will end up being my Secret Santa.
____ is against any holiday that separates me from my money.
____ "Santa Claus has the right idea. Visit people once a year." - Victor Borge

One of my readers, Rob, sent me a few Holiday Facebook status updates:
____ A song told me to Deck the Halls...so I did. Mr.and Mrs. Hall are not very happy.
____ Don't worry about what you eat between Thanksgiving and Christmas. Worry about what you eat between Christmas and Thanksgiving.
____ took 1st place in the Reindeer games.
____ is having a spirited game of "got your nose" with a snowman. I'm totally kicking his ass!
Thanks, Rob! 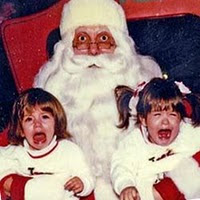