Facebook suggestion:
____ Dear Facebook, Stop being like my Mom and suggesting people for me to be friends with.
Work and Facebook:
____ If my boss saw how many cool things I post on Facebook in a day, he'd stop saying I'm unproductive.
Observation:
____ The more a person says, "I'm not usually like this", the less it's true.
Confidence:
____ doesn't want to brag, but I'm pretty confident I could win a spelling be.
Google maps:
____ thinks that Google Maps can skip a few steps when giving me directions. I'm pretty sure I know how to get out of my neighborhood.
GPS:
____ My day is ruined when I don't beat the "Estimated Arrival Time" my GPS gives me.
Being nosy:
____ Hearing the end of a bizarre conversation makes me wish I had started eavesdropping earlier.

Thanks to Wendy Swift for sending me the following status updates:
____ spends a lot of time wondering what normal people would do in my situations.
____ is curious: Why would anyone in their right mind buy grapes with seeds when the convenience of a seedless grape is right there?
____ you know you've truly grown up when you realize your parents knew exactly what they were talking about.

According to TechCrunch, Egypt's Al-Ahram newspaper reported the following:
"A young man in his twenties wanted to express his gratitude about the victories the youth of 25th of January have achieved and chose to express it in the form of naming his firstborn girl "Facebook" Jamal Ibrahim (his name.) The girl's family, friends, and neighbors in the Ibrahimya region gathered around the new born to express their continuing support for the revolution that started on Facebook. "Facebook" received many gifts from the youth who were overjoyed by her arrival and the new name. A name [Facebook] that shocked the entire world."
Personally, I'm just glad the girl wasn't born in 2003, because then her name would have been "Myspace," and that would have been ridiculous.

Sarcasm:
____ can't believe there are so many privacy risks involved in broadcasting my entire life on Facebook.
Bad day?
____ wishes that some people wouldn't talk to me in the morning until I've had my coffee. (I don't drink coffee.)
____ God, give me patience, because if you give me strength, I just might punch somebody.
Learning:
____ is learning from the mistakes of others who take my advice.
Wasting time:
____ "Just going on the computer to check one thing!" - Me, three hours ago.
The Moon:
____ Don't blame it on the Full Moon, people. We're ALL crazy. All the time.
Annoyance:
____ These red lights never give me enough time to finish my Facebook status upda

A few favorites from my FACEBOOK FAN PAGE this week:
____ ¡ǝɯıʇ ǝɯɐs ǝɥʇ ʇɐ ʞooqǝɔɐɟ ǝsn puɐ puɐʇspuɐɥ ɐ op ʎןןɐuıɟ uɐɔ (thanks, Lokesh Jb!)
____ M̸o̸n̸d̸a̸y̸ T̸u̸e̸s̸d̸a̸y̸ W̸e̸d̸n̸e̸s̸d̸a̸y̸ T̸h̸u̸r̸s̸d̸a̸y̸ Friday!! Woohoo! (thanks, Andre Drex Coetzee!)
____ Sometimes I click the "LIKE" button on people's statuses just so I can then click the "UNLIKE" button. One of my many cheap thrills... (thanks, Ashley Sykes!)

Facebook Status updates about Facebook:
____ Friends don't tag friends in hideous Facebook pictures.
____ is thankful for Facebook. Before, I would just scream out my thoughts to anyone who would listen.
____ In the past, when you were angry with someone, you fought them. Now you just defriend them on Facebook.
Money (or lack thereof):
____ is going to take my paycheck to the bank. It’s too little to go by itself.
____ People with a lot of money are miserable. Or so I've heard.
Too much fun?
____ The amount of fun I have on a night out is directly proportional to the number of items I cannot locate the next day.
Work:
____ Egypt needs a new president. I need a summer job. Coincidence? I think not.
Problems:
____ solves many of my problems by simply ignoring them. 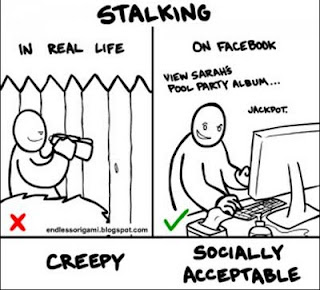 Facebook Status updates about Facebook:
____ What happens on Facebook stays on Facebook! (and then gets sold to the government for everyone to see).
____ This is ridiculous - I have so much work to do this morning that I can barely get on Facebook. My boss is so rude.
Laziness:
____ thinks that it's amazing how quickly I can convince myself that I didn't need to do today the things I needed to do today.
Dating and Facebook:
____ It's no longer "Are we dating"? It's... "Are we Facebook official?"
Fan updates:
____ My new diet plan consists of watching the show "Hoarders" every time I'm hungry. (thanks, Margot!)
____ reads recipes the same way I read science fiction. I get to the end and I think, "well that's not going to happen." (thanks, Rebecca Kelleher!)