DO YOU WANT TO GET LOTS OF LIKES ON FACEBOOK? KEEP READING.

What keeps me awake at night? The idea that all of the funny status updates have been said. Then I check out the MY STATUS IS BADDEST Fan Page and all is right with the world.

____ It's sad how Wile E. Coyote is only remembered for his violence, and not for his brilliantly realistic paintings of tunnels. (William Hale)
____ So have they made a drink called "Tequila Mockingbird" yet? What the hell are they waiting for? (Nobo Dy)
____ My husband said he'd fulfill all my fantasies for 1 month if I only took the garbage out. But, I played it cool and held out for waffles instead. Wait...What? (SamGirl Sunday)
____ My phone refused to "like" your status...I have a smart phone by the way. (Adam Apple)
____ I don't have ADD. I just really, really don't give a sh*t about what you're saying. (Donny Norris)
____ My dunce cap is an empty 12 pack box. (Lisa James)
____ OF COURSE... I’d LOVE to come to your Halloween party.. I thank I will come as the invisible man. (Adam Apple)
____ is taking a shot for every "like" I get on this status. Then again...I'm taking shots whether you bastards like it or not. (Rae Broman)
____ doesn't care how close we are on-line, if we meet in person and I say "if I have a problem" and you don't immediately say "Yo, I'll solve it!" we just can't be friends. (SamGirl Sunday)
____ hates when it's dark and my brain is like "Hey you know what we haven't thought of in a while? Monsters." (Chris Hallman)
____ When someone says they have to ask you a question, you think of all the bad things you've done recently. (Marcos DeAssis)
____ Just so everyone knows.. If I scroll down the page and see you have posted more than 3 statuses, more than an hour ago, and you have no "like"s: I'm obligated to "like" your sh*t to keep you from jumping off of a building. (Sarah Burns)
____ If it's really the thought that counts, we're all screwed. (Nobo Dy)
____ loves Halloween! I tell all the kids that come to my door..."I'm hungry, could you spare a Kit-Kat or Snickers bar?" I have food for a week...bless their little hearts! (Mustache Mann)
____ Maybe I like my dirty mouth, Orbit gum whore. (Michelle Lacy Lauff)
____ robbed a bank...now the question is what to do with all that sperm. (Adam Apple)
____ This year I'm going to make the trick-or-treaters tell me jokes for candy. If I don't think I can turn it into at least a 10 like status they don't get any. (SamGirl Sunday)
____ While walking around in Target they announced over the intercom, "Mr. Norris your party is waiting at register 6." I hurried to the front of the store. There was no PARTY, just my lame ass family standing there looking at me impatiently... :/ (Donny Norris)
____ Going to go check my inbox. I'll just need some privacy and a hand mirror. (SamGirl Sunday)
____ If I'm ever in a police lineup, I'm gonna' hold up a little sign that reads: "I know where you live and the names of your children......with a ;)" just in case. (Mustache Mann)
____ did 10 minutes of cardio this morning. I was still drunk from last night, and I was trying to tie my shoes but whatever. (Nobo Dy)
____ "Boooooooooooobs" - Horny Ghost (Adam Apple)
____ Whenever somebody I don't want to talk to on Facebook speaks to me, i'm not mean enough to ignore them. Instead, I close the chat box with them then post on my wall "Is anyone else's chat not working? :/" In the hopes that they read it. (Ali Kerr)
____ Alcohol is the liquid version of Photoshop. (William Hale)
____ How does soaking Flintstones gummy vitamins in vodka not make perfect sense? (Caitlin Marley)
____ thinks it's safe to say that being on Facebook as much as I am, when someone tells me to "get a life", they are asking entirely too much of me. (Art Mabry)
____ in my other life..I have one (Adam Apple)
____ What do you call a dead blonde under the porch? Last year's hide-and-go-seek winner. (Carrie Danley)
____ "WTF??!! That ghost just took a sh*t all over the house!!!" - Paranormal Activia (William Hale)
____ Pain makes you stronger. Tears make you braver. Heartbreak makes you wiser. And vodka makes you not remember any of that crap. (Rae Broman)
____ Why the f**k does toothpaste fall so easily off your tooth-brush, but the second it hits the sink it turns into some apoxy resin type bullsh*t and you can't wash it down the drain to save your life?! Grr. (Dave NoMoneyhoney Blum) 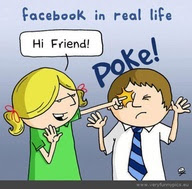 ____ Instead of trying to figure out who I offend every night, I just mass text everybody on my phone list, "I was drunk." (Nobo Dy)
____ There should be a facebook rule that reads: like my status before you comment. (Knee Kuuipo Kahalehili)
____ The kids have been glued to the TV all day. And I still have more than half a tube left. Bargain! (Danny Coleiro)
____ This status is brought to you by: A DESPERATE NEED FOR ATTENTION!!!! (Nobo Dy)
____ saw a woman crying as she was buying tampons earlier. Must be going through a tough period in her life. (Hollywood Allan)

Think you can do better? Become A FAN ON FACEBOOK and submit your most original, witty and hilarious status updates. Thanks for reading!