____ Anyone with 600 Facebook friends shouldn't have to take their own picture. (Julie A Ostmann)
____ People who say "cash money" are "idiots dummies." (Juliet Rockspin)
____ I'll know love when I see it. That's why I refuse to get corrective lenses. (Mustache Mann)
____ Before I lose my phone, end up naked, high, drunk and/or possibly arrested, I would like to wish you all a Happy Friday. (Carrie Danley)
____ Today, I saw a license plate frame "My car, daddy's money" on a battered Chevy Aveo. Daddy had 600 bucks, eh? Calm down, princess. (Donna Binky West)
____ Wow, my neighbours get horrible phone reception under their bed. (Kylie Toyne)
____ "Hi...are my nipples even?" Today's elevator greeting. Wish me luck! (Toni Daniels)
____ Rice cakes do not taste like cake at all. Lies! All Lies! (Lisa James)
____ I like to sleep with the bedside lamp on. Some people think it looks funny, but I personally think it makes a lovely hat. (Shafique Khatri)
____ Men are like a fine wine. They start out as grapes, and it's up to us ladies to stomp the sh*t out of them until they turn into something acceptable to have dinner with. (Jenni More)
____ When someone I don't know likes one of my statuses I think, "Will this be the story we tell our grandkids?" (SamGirl Sunday)
____ If I ever got a job at Disney, I'd probably say "What kinda Mickey Mouse operation is this!?" so much I'd be fired by lunchtime. (Eric Caro)
____ If it weren't for WebMD I would have never known what symptoms to mimic so I could get all these prescriptions from my doctor. (Mike Seriously)
____ Read this status carefully. It's never going to make the blog, and it'll be gone forever when a few more posts knock it off the page. And then you'll be sorry.(Danny Coleiro)
____ I think I could start a pretty successful company that makes nothing but excuses. (Shannon Seymour)
____ WooHoo! I just won $500 on a lottery ticket. I just knew buying 1000 tickets today was a good investment (Mys ter E)
____ I hate waking up after a night of drinking to realize I spent a bunch of money on something stupid. Anyway, I'm off to the airport to pick up my Russian mail order bride. (Sean Shipley)
____ I just snatched your little ray of freaking sunshine and flushed it down the toilet. How ya feeling now? (Carrie Leigh)
____ It takes 7 seconds for food to pass from mouth to stomach. A human hair can hold 3kg. The length of a Penis is 3 times the length of the thumb. The femur is as hard as concrete. A woman's heart beats faster then a man's. Women blink 2x as much as men. We use 300 muscles just to keep our balance when we stand. A woman has read this entire text. A man is still looking at his thumb. (Egg Head)
____ I wish my cat would stop thinking outside the box. (Tom Guntorius)
____ Sometimes I'll add in a "haha" so I don't seem so murderous. haha. (Rajat Behl)
____ Friday: YES, ITS THE WEEKEND! *Blink* Monday: WTF just happened?! (Andrew Lyngwa)
____ I don't like the way water looks at me. I think it's jealous of my relationship with alcohol. (Slinky Shrupti)
____ I went to fill out a job application today. When I got to: "position applying for", I wrote "yours" followed by a ";-)" and an "LOL". I think I NAILED it! (Mustache Mann)
____ There are 3 kinds of people in the world. Those who learn by reading, those who learn by observing and those of us who just HAVE to pee on the electric fence. (Carrie Leigh) 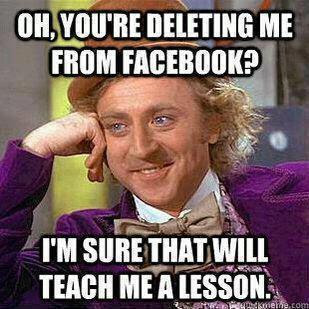