People who visit my blog regularly know that the Facebook status updates that my readers post are not your typical status updates. They are so, so much better. It only took me 62 hours to scroll through the past few days on my FACEBOOK FAN PAGE to grab my favorites, so thanks to all who are contributing to the slow demise of my social life. Here are the first 43:

____ is hungry enough that my stomach sounds like Morse code for wanting a double bacon cheeseburger. (Nobo Dy)
____ Just going through my old FB statuses & deleting the ones no one liked so I don't look lame. (SamGirl Sunday)
____ Why do people ask "What the hell were you thinking?" Obviously I was thinking I was going to get away with it and not have to explain it. (Cody Sanders)
____ The awkward moment when you get in the van and there's no candy. (Donna Pedersen Watson Hudon)
____ just finished watching that movie where Julia Roberts has a lot of teeth. (William Hale)
____ The difference between my ex and a catfish is that one is a bottom feeding scum-sucker and the other is a fish. (Jad Bou Karam)
____ If your neighbors seem like the "nicest, quietest, friendliest" people, they probably have kidnapped humans in their basement zoo. (Jenni More)
____ honestly thinks that women should run the world. That will give men more time to drink beer and watch sports. (Harish Agrawal)
____ is not as random as you think I salad. (Victoria Beryl Zelinski)
____ You know what the trouble about real life is? There's no danger music. (TaLeighea Iaintelin)
____ wishes the best for my ex-girlfriend. I really do. I hope she meets someone honest, friendly, and kind. Cause, you know, opposites attract. (Jacob Grant)
____ Never trust a quiet toddler. (Linda Carey)
____ Sometimes when I'm bored, I like to wear khakis & a red polo, then head to Target and pretend to work there. (Nobo Dy)
____ My boss just ticked me off. How sad is it that my immediate revenge thought was: "Oh yeah, I'll just waste more company time on Facebook!" (Jacob Grant)
____ Friendship is born at that moment when one person says to another, "WTF! You too? I thought I was the only one." (Snehal Nakade)
____ if someone tells you you're their "everything", you should expect to be murdered at some point. (Jenni More)
____ Nothing cures insomnia like the realization that it is time to get up. (Snehal Nakade)
____ Hey, I found your nose! It was in my business again. (Stacey Alsky)
____ Everything I ever needed to know about structural engineering, I learned from Angry Birds. (David McNamara)
____ When I grow up, I want to be a kid. (Mhalou Diaz-Consengco)
____ I like to stop the microwave with one second to go; it makes me feel like a bomb defusal expert. (Jason Fundora)
____ tapes microwave popcorn to the ceiling because it's cheaper than a smoke alarm. (Nobo Dy)
____ If Plan A doesn't work, the alphabet has 25 more letters. Keep calm. (Gagan Adiwal)
____ And I was like "No, Coke is NOT ok. I wanted a Pepsi." And she was all "Sir, 911 should only be dialed for real emergencies." (Nobo Dy)
____ You know that whole walking-away-in-slow-motion thing that heroes do in movies when something is exploding? I tried that today. Really wish I hadn't. Really, really wish I hadn't. (Jacob Grant)
____ hates it when I look horrible in a group photo and the person that looks good refuses to delete it. (Oren Dee)
____ tried giving my boss a compliment today. Apparently "You have a great witch's cackle" isn't a compliment. (Jacob Grant)
____ was going to give you a nasty look but I see you already have one. (Nobo Dy)
____ Jiffy Lube’s motto should be “it’s always more than just an oil change” (Karen Vanselow)
____ went to the store to get "Where's Waldo?" but couldn't find it. Well played, Waldo. (Victoria Beryl Zelinski)
____ A fun thing to do in the checkout line is to take one thing from the cart in front of you and see if they notice. Last week I took a baby. (Victoria Beryl Zelinski)
____ would like to learn one of those clicking languages from Africa because I get the feeling my knees are trying to tell me something. (Mhalou Diaz-Consengco) 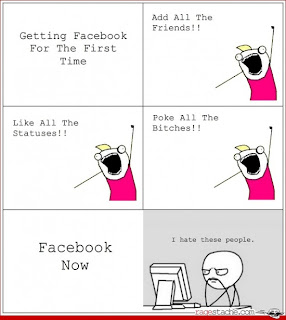 ____ How does Wile E. Coyote afford all those damn rockets?! (Sonia Gandhi Mojica)
____ This Tequila tastes like future bad decisions. (Nobo Dy)
____ thinks that your problem is low self-esteem. It's very common among losers. (Sonia Gandhi Mojica)
____was bored, so I said "Wow, that's a weird place to put a piano." You wouldn't believe how many people looked around for a piano. I was in an elevator. (Farhanah Khalit)
____ Math questions are so stupid! They're like, "If I have 5 bottles in one hand and 6 in the other, what do I have?" Oh I dunno, a drinking problem maybe?! (MrsFabulous Cervantes)


____ is licking the cake batter out of the bowl because I'm a fearless bitch who's not afraid of a little salmonella. (SamGirl Sunday)
____ How come Mario can smash through bricks, yet he dies when he touches a freakin turtle? (Jimi Anastasio)
____ If you see a plate of bacon running down the street screaming "HELP ME!" please return it to me. It's totally overreacting. (William Hale)
____ Did you know dryer sheets double as toilet paper and leave your ass smelling like meadows and rain drops? (Michelle Lacy Lauff)
____ As you're reading this, you should say to yourself, "Why am I talking to myself?" (Nobo Dy)
____ When I see an argument on Facebook, I sit there refreshing the page while thinking to myself, "This is gonna be good!" (Donna Young)

Thanks, everyone! Keep them coming!