____ I think I'm getting a sore throat. Time to go lick the bosses phone. (Lisa James)
____ ”and another thing!...” -Me, when I'm drunk. (Shaunna Shurtliff)
____ NO,I'M NOT DRUNK. I'M JUST TIRED FROM BEING UP ALL NIGHT DRINKING. (Erwin Charming)
____ I'll bet if it ever really rained cats and dogs, Bob Barker would be pissed because who's gonna neuter them all? (Jack Olivar)
____ Back in my day, you knew who your real friends were. Because they ranked you in order of importance on MySpace. (Michael Wenk)
____ Just saw a doctor eating an apple. My whole life is a lie. (Rajat Behl)
____ Sometimes I wonder if these old men sitting on the benches in the mall waiting on their wives to finish shopping were old when they sat down!? (Donny Norris)
____ The sum of the cabbage is directly proportional to the square root of the carrot divided by the mayo. That's Cole's Law. (Hollywood Allan)
____ I find that some of the best status's are the ones that drag you in slowly and then leave you waiting in antici... (Chesty La Rue)
____ Everybody using ASAP... needs to calm the f*ck down! (Jack Wagon)
____ Hating people takes too much energy. I just pretend they’re dead. (Javier Spartikus Malave)
____ Don’t mess with me. I know how to sit still for a tattoo. (OverDose)
____ The biggest book I ever wrote was the list of things I don’t give a %$&^ about (Adam Apple)
____ I love the Clorox bleach commercial where the kid says "Mommy, I went poo poo" and sh*t in the tub. We need more commercials like that. (Toni Daniels)
____ Sick of seeing pics of everyones food.  I am posting a few of mine on their walls. Post digestion. (Lisa James)
____ I changed my a$$hole neighbor's tire for him today...from "inflated and in fine-working condition" to "hacked to pieces with a hatchet". (Bob MuppetMan Brittain)
____ Life...it's just an "F" in lie. (Chesty La Rue)
____ At a wedding reception I recently attended someone said, "All the married men please stand next to the person who has made your life worth living." The bartender was nearly crushed to death. (Shannon SeeMore)
____ "If you can't beat them, join them". Then become their friend and when you build up trust, and they least expect it, beat the crap out of them then. (Dow Jones)
____ Do I miss being married? Sure, what could be better than being in a relationship with a female, bipolar version of Darth Vader? (Sean Shipley)
____ I've was reading a magazine in the waiting room at the doctor's office earlier. Apparently Posh Spice and David Beckham are now an item?! (Tom Guntorius)
____ It's raining here. Is it raining where you are? I love Facebook. (Jack Wagon)
____ Oooooh, It's SHARK week and NOT "shart" week...embarrassing :/ (Donny Norris)
____ Sometimes when I am filling up my car with gas, I like to take the antenna off the car challenge the person at the next pump over to a sword fight. (Beau Diggity)
____ Teaching your kids to swim isn't hard...You just throw them in the deep end and either they learn to swim or you get your social life back. (Bald Beaver Hunter)
____ I've been using creamer in my coffee for years and I'm still single! Screw you Coffee-Mate! :( (Jack Wagon)
____ Today is going to be another exhausting day of judging people and pretending to listen. (Chesty La Rue)
____ I was just looking in the mirror this morning, thinking about who I was. I suppose you could say I was reflecting. (Jack Olivar) 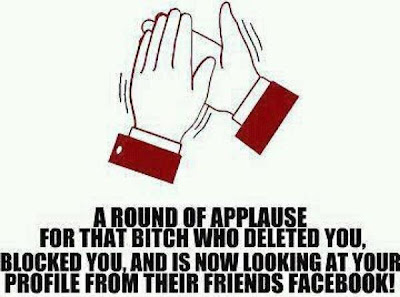 ____ I'm writing a new book. It's called "Fifty Shades of Shut The F*ck Up." (Angie Marie)
____ Oh, nothing. Just doing a little late night stalking. (Lisa James)
____ I'm tired of writing "Sent from my iPhone" at the end of all my e-mails, maybe I should just get an iPhone. (Javier Spartikus Malave)
____ I was at the grocery store check out line reading the cover of People Magazine when it dawned on me...I'm naked. (Bob MuppetMan Brittain)
____ I literally get 1/2 of my news from piecing together actual events based off of your Facebook statuses. (Lone Rider)
____ I was fighting with this guy over who's lazier. I let him win. (Mahesh Shroff)
____ Where should we drink lunch today? (Ray Cukui Hernandez)
____ I have learnt how to play various kinds of violins...you could say I'm violingual. (King Julien)
____ Is there a 5-second Rule for when you drop babies? Asking for a friend. (Jason Mykl Snyman)
____ I have been through the desert on a horse with no name. Ok, it had a name but I forgot it. (Mys ter E)
____ I'm not one to brag, but I could have been in this years Olympics if they had an event where you fall over things without spilling your beer. (Dave NoMoneyhoney Blum)
____ I say, "Watching gymnastics" because it's manlier than saying, "Watching hairless muscled men in spandex unitards compete for jewelry". (Daniel Kilonzo)
____ Whenever I think of a funny status I always get a pen and write it down so I can use it later, and if the pen is too far away I just convince myself that it wasn't that funny anyway. (Gary Hensley) 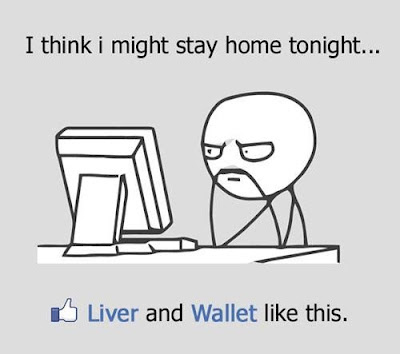 ____ I can always tell when my boyfriend wants sex, he begins the conversation with "I was thinking about what you said and you're right." (Rita Filakia)
____ I enjoy going to costume parties that have a theme. "Nude beach" is my personal favorite. (Mustache Mann)
____ If Olympic drinking was an event I would probably take gold in the floor routine. (Lisa James)
____ If I suddenly repost your whole timeline... It's either cause I'm drunk and bored or high and bored or both and bored, but never just bored OK? (Jack Wagon)
____ you can lead one to your status, but you cant make them "like". (Jessica Kennedy)
____ If you can't trust a bunch of random strangers on the Internet, who can you trust? (Matt Procella)
____ :-) :-( :-D :-| ;) ;^) :'-) :/ (-_-) - HEYY!!! Stop playing with my emoticons!! (GoldRobo Dancer Guy)
____ Being a trampolinist is a career of ups and downs. (Hollywood Allan)
____ If people could hear the five seconds after we hit "end" on a call, we would all have no friends. (Frank Enstein)
____ I can't stand people who waste my time...because time is money, got my money on my mind all the time and the mind is a terrible thing to waste. Something like that. (Stephanie Manera)
____ Kids next door are having a water war, so I'm going to take my daughter's super soaker and fill it with vodka. They'll think they've won till I take out my lighter. (Amy Smith Wexler)
____ If I have ever made you laugh, I have done my job. If I have ever made you throw up in your mouth some, I have exceeded all expectations! (Beau Diggity)
____ They should play the national anthem of the bronze medalist too, but with an air horn/cowbell ensemble so they know their place. (Jacque Bourne-Hubbard)
____ Two words-----Febreeze Underwear. (Todd Landon Wildig)
____ Sure…all you ladies have plans to change me, but as soon as I crap my pants suddenly no one wants the job?!?! (Jack Olivar)
____ My boss told me 85,000,000 times today that I really need to stop exaggerating. (Stacy Kaetterhenry Fournier)
____ I hate everyone. Sorry. I mean I hate waking up too early. (Sean Shipley)
____ Water is the most essential element of life, because without water, you can't make coffee. (Daniel Kilonzo) 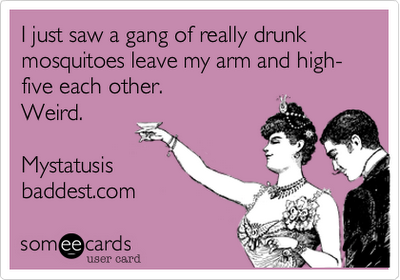