I was just thinking about the turkey I will consume today for Thanksgiving, which made me think about how turkeys gobble, which made me think of the word "gobbledygook" which I love because it means "nonsense", and then I thought of all of you and it made me really thankful that you've been a part of the remarkable nonsense that is my FACEBOOK FAN PAGE. Have a Thanksgiving filled with gratefulness, but don't forget to add in some high jinks, too. Here are a few Thanksgiving status updates my fans shared:

____ The people of Colorado and Washington State are opting for a less traditional Thanksgiving dinner this year: Turkey. Pot. Pie. (MY STATUS IS BADDEST)
____ Give spanks. Not thanks. (Lisa James)
____ Happy Thanksgiving to all my American friends, and a Happy Ungrateful Bastards Day to everyone else. (Danny Coleiro)
____ Thanksgiving is the time of year when we all gather together and give thanks that we don't have to be around this bunch of assholes but once a year. (Howie Feltersnatch)
____ I'm making deviled eggs for Thanksgiving, because they say you are what you eat, and I'm full of wicked yokes. (Eric Caro)
____ So Thanksgiving is about being grateful, well I'm grateful for you bastards liking my posts. Does that count? (Sonia Lerma)
____ Isn't it ironic that a turkey goes gobble gobble, and on Thanksgiving that's what we do to them? (Dow Jones)
____ I'll bet Amish people look forward to Thanksgiving since it's the only time their clothes look festive. (Jack Olivar)
____ I'm kind of shocked turkeys live as long as they do with those pop-up timers lodged in their chests. (Bob MuppetMan Brittain)
____ Wal-Mart said that the employee walk out on thanksgiving will not affect our shopping, since we are already used to waiting for an hour to check out. (Lisa James)
____ So I've always wondered...all those turkeys I see this time of year with pilgrim hats, were they like trying to fool the pilgrims, or were they cannibals, or what?
(Jack Olivar)
____ Mom says that if I'm a good girl & don't use my potty mouth.. I can sit at the big kid table this Thanksgiving. She's so silly. (Toni Daniels) 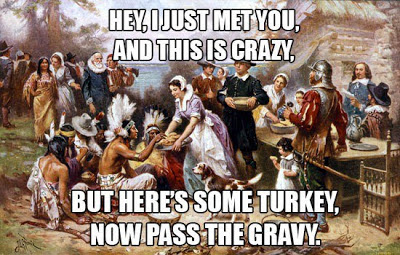