Last year, I didn't compile status updates about the New Year. Perhaps I was overwhelmed by the 300+ status updates posted daily on my FAN PAGE at the time. I'm going to post as many as I can find and post them now. Disclaimer: If the original status update referenced "2011", I changed it to "2012" because I felt like it and I'm the boss of you. Thanks for sticking around during this peculiar year. I can't wait to see what you unpredictable and demented people come up with in 2013!

___ My New Year's resolution is to take up a new hobby, like jogging. I just hope it doesn't interfere with my other hobby: lying. (SamGirl Sunday)
____ This year, instead of making New Year's resolutions, I'm making Old Year resolutions, where I look back at the things I did and pretend that's what I set out to do. (Danny Coleiro)
____ One of my New Year's resolutions is to see Snakes on a Plane. Not the movie. I just really wanna smuggle some snakes onto a plane this year. (Jack Olivar)
____ I'm trying every microbrew and major brand beer from around the globe. Yup, THIS is my New Beer's resolution. (Mustache Mann)
____ If I remember New Year's Eve, there is something seriously wrong. (Adam Apple)
____ New Year's Resolutions are for people who don't have the willpower to stay the same. (Donny Norris)
____ Well, by this time Tuesday, I will have broken every single one of my resolutions. (Bob Brittain)
____ I'm randomly selecting one of your profile pics to print and make out with at midnight. (Mya Sisnice)
____ New Years Resolution #1: Don't throw up (Tom Guntorius)
____ My New Year's Resolution #1: Incorporate bacon into a majority of my meals. (Dotty Joyner)
____ All ready for my New Year's Eve party. I forgot the noisemakers so I just told my friends to bring their kids. (Lisa James)
____ Kiss me ~ it's midnight somewhere. (Helen Waite)
____ 2013 New years Resolution: Let's try NOT to be throwing up hot Gatorade at 8 a.m. on Jan 1st. (Amy Horisk)
____ For a couple of weeks now I've been trying to come up with a few meaningful, attainable New Year's resolutions but I've come to the conclusion that I'm perfect & I don't need to change a damn thing. (Jerry Pisano)
____ How much do you have to drink to forget a year? Whatever that is, that is what I will drink on New Year's Eve. (Todd Landon Wildig)
____ I tried to reflect back over this year but I can't remember past 5 p.m. yesterday. (Donny Norris)
____ I'm going to spend New Year's Eve the same way I spend any other night of the year...getting horribly smashed and falling asleep in my neighbor's shrubs. (Bob Brittain) 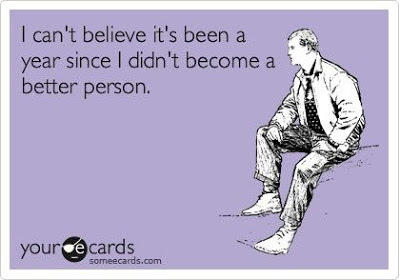