My FACEBOOK FANS have been very busy writing about our impending doom tomorrow. You'd think they would be out getting drunk or building that treehouse they always wanted, but whatever. Thanks, guys. I sure will miss you wacky bastards!

____ Can someone tell me why we are putting so much faith in the Mayans? They couldn't even predict Spanish guys in funny hats destroying their civilization much less the end of the world. (Jack Olivar)
____ The next time you come across a Mayan making a calendar, leave him the f*** alone! (Bob MuppetMan Brittain)
____ Just two weeks 'til the end of the Mayan calendar and the start of the apocalypse. I hope it's not as devastating as Y2K was. (Hollywood Allan)
____ I hope the Mayans were right, because I've run out of storage space for all these f***s I don't give. (Danny Coleiro)
____ According to the Mayans this will be the last Monday ever. I hope they are right because I just flipped my desk, shot my boss with the stapler and told the whole office to suck my balls. Man I'm gonna miss Mondays, (Bald Beaver Hunter)
____ Preparation for End of the World, 15 days to go: Filling basement with lots of beer. (Lisa James)
____ I'm out of ice cream. Looks like the Mayans were right. (Imraan Jussab)
____ Sorry Mayans. The world won't be ending on the 21st of December. Apparently it already ended this morning when I left the toilet seat up. (Joe Felli)
____ You'd think we'd get the apocalypse off to spend with our families, but NOOO. (Danny Coleiro)
____ My wife and I were fighting over a really old calendar. She said it was hers, but it was actually Mayan. (Dave NoMoneyhoney Blum)
____ If the Apocalypse doesn't happen, don't worry. People will be posting "It's not the end of the world!" jokes all f***ing day long on Facebook.(Mys ter E)
____ If the world dosen't end on the 21st, I sure do have a lot of MREs to gift wrap.(Donny Norris)
____ I'm taking Pre-Orders for some new merchandise: "The World was supposed to end but I'm still alive and I all got was this lousy t-shirt". (Lisa James)
____ Thanks to the Mayans, we'll never get to experience 13/13/13. (Bob MuppetMan Brittain)
____ I've been preparing for the zombie apocalypse my whole life by ordering my steaks rare and being completely dead inside. (Connie Day)
____ World is going to end in 5 days and YOU are worried about how I GOT INTO YOUR CAR? (MindFreak Covert Operative)
____ I've decided to quit smoking. I want to be fit enough to lift a 32 inch flat screen during the "end of the world" looting coming up. (Aubrey Otieno Otieno)
____ "Well, this is awkward..." - the Mayans. 22-12-12. (Danny Coleiro)
____ Tonight in MSIB news, the Mayan calendar draws to a close. A select few have prepared for the impending zombie apocalypse, which the government has openly stated will end mankind. The leader of the resistance, Donny Norris, states: "With proper, pre-planned stockpiles of food, ammunition, and knowledge of how to live off the land, mankind can survive. However, NHL fans? All hope seems doomed."  (Dave Murawski)
____ The Mayan Calendar predicted that on 12-21-12, there would be some really bad status updates about 12-21-12. Like this one. (Imraan Jussab)
____ I'd like to confess, before the world ends, that I don't really like anybody's status. Unless the Mayans were wrong. In which case, you're the best thing to ever happen to the Internet. (Danny Coleiro)
____ So what if I can't spell "Armagedon"? It's not the end of the world. (Les Chinyanga)
____ Does anyone know what time the world is ending on the 21st? That would be helpful information. (Lisa James) 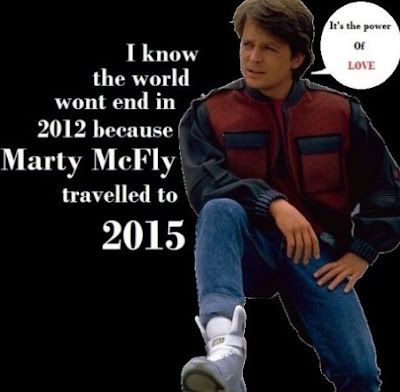