My FACEBOOK FANS have had a lot to say about "the most wonderful time of the year".These were originally posted last year. Enjoy!

____ All I want for Christmas is a go-go gadget bitchslapping arm. Is that too much to ask? (Lisa James)
____ My favorite part of Christmas is family dinner and all the drunken confessions. (Donny Norris)
____ Dear Santa: I have been good for the past week or so. Lets just focus on that. (Helen Long)
____ Every time this status goes unliked a reindeer dies. (Rob Parsley)
____ My kids still think that mistletoe comes in sandwich bags. (Mustache Mann)
____ Santa is Satan misspelled. I'm on to you, Fatman. (StevieLyn Green)
____ Ok, I need you guys to vouch for me. I accidentally spelled Satan instead of Santa in Christmas lights and my neighbors are convinced my star of Bethlehem is a pentagram. Oh dear! (Donny Norris)
____ Just bought forty copies of Justin Bieber's latest CD as Christmas presents for all those who really pissed me off throughout 2012. (Danny Coleiro)
____ Yeah, I can see where decorating your office for Christmas takes priority over you actually doing the job you're getting paid for. While you're at it you might as well decorate the bathroom too, someone might actually give a sh*t in there. (Toni Daniels)
____ Don't know what to get your husband for Christmas? Whatever you give him, give it to him naked. (Jane Withsweet Tatts)
____ This is my Christmas letter. The kids are getting big and sh*t, some old people died this year and sh*t, you should be receiving the lame holiday post card with the gaudy holly borders of me and the fam on the beach this summer. We are having weather and sh*t and we love you and miss you and sh*t. -Me. This is how they might as well all read. (Donny Norris)
____ "Ho, Ho, Ho!" -Santa Claus/Pimp, doing a head count. (William Hale)
____ I hope my mum gives me money for Christmas this year instead of another musical jewelry box that plays "Someday My Prince Will Come." (Mya Sisnice)
____ I would like to beat the Christmas Spirit into some folks. (Donny Norris)
____ Dear Everyone I Know, The Ghost of Christmas Yet to Come just left and it looks like you're getting jack sh*t from me again this year. Merry Christmas! (Bob Brittain) 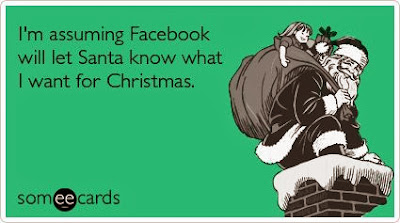 ____ Just bought an artificial Christmas tree and the clerk asks me, will you be putting this up yourself? NO YOU SICK BASTARD!! I'm putting it up in my living room! (John Jordan)
____ We don't have mistletoe at Christmas, so we just kiss under the influence. (Tom Guntorius)
____ You have 5 minutes to repost this to 8 of your closest friends and loved ones or you will have 7 years of bad luck, a broken mirror, a black cat crossing your path, leftover spaghetti in your hair, 4 chicken wings, 2 ugly Christmas sweaters, and a partridge in a pair of trees. (Juliet Abram)
____ I'm making everyone's Christmas gifts this year, so if you were thinking about friending me you may want to wait until the New Year. (SamGirl Sunday)
____ Lets just forget about Christmas past and remember to get my Christmas present. (Lisa James)
____ Ok, I've got Christmas covered. Tons of boxes wrapped and under the tree. Nothing is in them. I'm going to stage a break-in on Christmas Eve, hide the boxes and lie to the kids about all the cool stuff that got stolen. (Donny Norris)
____ I just stole Santa's naughty list! Ironically, it's almost identical to my friends list. (Dave NoMoneyhoney Blum)
____ If Santa doesn't bring me something good I'm going to pee in his lap like I did when I was eight. (Thomas Christopher)

Like these? Become a FAN ON FACEBOOK... or Santa won't bring you squat. Do the right thing.