Do you love inspirational Facebook status updates? Do you want to help make your Facebook friends better people? You are lost. These status updates are nothing like that.

My FACEBOOK FAN PAGE has been busy the last few days. Many of you have suggested shorter blog posts more often, but I wanted to publish this long list tonight because they are too funny not to. Thanks, everyone! :)

____ Sometimes I like to go to McDonald's and order two all beef patties, special sauce, lettuce, cheese, pickles, onions on a sesame seed bun. (Jack Wagon)
____ Honestly, nine times out of ten, when you say "know what I mean?", I don't. (Danny Coleiro)
____ I just managed to walk over hot coal without burning my feet. F***ed up my shoes though. (Chesty La Rue)
____ I'm not having kids until there is an extendable slapping hand that can pop out of the backseat. Safety first. (Lisa James)
____ My favorite vegetable is bacon. (Bob MuppetMan Brittain)
____ I can't stand the kind of people that act like the kind of people I can't stand. (Mike Seriously)
____ They said if I don't stop talking about boobs, they'll send me to the mental institute. Lol, ins-TIT-ute. (Bate Mann)
____ Hey newbies, say goodbye to your life. MSIB has you now. (Adam Apple)
____ Sometimes I lie awake at night and wonder what my life would be like if I actually had one. (Danny Coleiro)
____ I will probably literally die of sleep deprivation if Facebook ever adds a dislike button. (Connie Day)
____ I put laxatives in my bosses slim fast. She's gonna be so skinny! (Lisa James)
____ I love looking at my coworker from across the room and making the throat cutting gesture to her while no one else is looking. (Javier Spartikus Malave)
____ So far the only thing I've attracted with these edible undies is ants. (Susan Evon Cross)
____ Screw doing situps...teddy bears don't and everyone loves them. (Jack Olivar)
____ I like to make a comment, then "edit" what I say, to make your reply look stupid. (Mustache Mann)
____ I'm probably the oldest person crying in this McDonald's ball pit. (Chesty La Rue)
____ What a shocking and upsetting day! Found a letter in the mail this morning that read "If you ever want to see you're wife alive again, leave $100,000 in unmarked bills in the trash can on Darby Street". Seriously, does no-one know the difference between 'your' and 'you're' anymore? (Danny Coleiro)
____ I just saved a bunch of money on hair gel by wearing this porcupine on my head. (Jack Wagon)
____ Everyone is calling me Mr. Paranoid. I just know it. (Shafique Khatri)
____ I just noticed that what's worse than a cold toilet seat is a warm one. (Adam Apple)
____ I always keep a golf club by the side of my bed when I'm asleep. Just so if anyone breaks in, they'll know I play golf and that I'm too boring to have anything worth stealing. (Hollywood Allan)
____ Woot woot! 14 thousand of us liking this page warms my cockles! (Donna Hudon)
____ If I ask a girl out to dinner and she suggests getting coffee instead, I purposely show up 10 minutes late hoping she bought her own coffee. (Mike Seriously)
____ The sound of children laughing makes me happy. Unless I'm all alone in a abandoned hospital and my flash-light isn't working properly. (Chesty La Rue)
____ Just got called a "pretty young lady" from a 95 yr old man. Guess who just brought sexy back? (Toni Daniels)
____ Sunglasses...to protect my eyes from the sun and to protect others from seeing the storm behind them. (Stephanie Manera)
____ If I was in charge of making a sign describing our penal code, the exhibitionist in me would invite the community to witness its erection. (Sharon Anastasia Beaverhousen)
____ That scary moment when you realize your arm or leg is hanging off your bed... then quickly bring it back in so the boogie man won't get you. (Jack Wagon)
____ Last night once again proved that drunk texting is one of my hobbies, but not one of my talents. (Donna Hudon)
____ "Uh huh, uh huh, uh huh, uh huh, uh huh, uh huh, uh huh, yep, yep, uh huh, uh huh, ok, you too, bye": Man side of every phone conversation with his wife. (Donny Norris)
____ I think that boa constrictors get a bad rap. They don't mean to hurt anyone they are just really really caring and who doesn't need a hug? (Jack Olivar)
____ A stranger phoned me up last night asking me to meet him in the woods because he wanted to see my breasts. Weirdo never showed up. (Chesty La Rue)
____ If you get hit by a smooth criminal... Michael Jackson will appear and ask you if you are okay like a thousand times. (Jack Wagon)
____ I don't get why people have to lie to sound important. Now if you'll excuse me, I'm off to fight crime with The Avengers. (Hollywood Allan)
____ Be honest... you're a macroverbumsciolist, aren't you? (Danny Coleiro)
____ I hate having narcolepssssssssssssss (Danny Coleiro)
____ I always thought the song "I can see clearly now the rain has gone", was a tad insensitive to people who wear glasses. (Chesty La Rue)
____ Yes!! I took Happy Birthday and made it into one word, HappyBirthday so I could save it as a word and not have to type it out evryyyyyyy freaking time. I know, I am a horrible person, whatever. (Donny Norris)
____ Research shows that 68 percent of people find something "almost" dirty in every post. (Bate Mann)
____ The best thing about long fingernails is that you can store stuff like little pieces of potato chips as a snack for later. (Lisa James)
____ How is the award for the Oscars not a fuzzy green Muppet? (Jack Olivar)
____ If my calculations are right, by November of 2019 my uneven usage of conditioner will finally lap the shampoo and I will run out of both at the exact same time. (Ken Champaign)
____ If I had a dollar for every time I think about you, I'd start thinking about you. (Chesty La Rue) 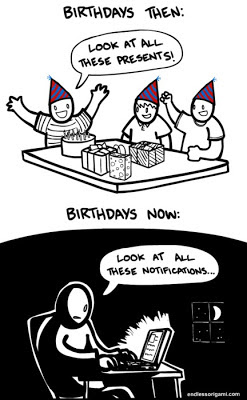 ____ Hey, just so ya know, sometimes I poke ya while I am wearing socks. (Beau Diggity)
____ Hey baby, "lick" my post and I'll "like" yours. Oops, that was a typo, but I don't have time to go all the way back to the first sentence and change it to "like".
(Mustache Mann)
____ Marriage. Because your shitty day doesn't have to end at work. (Hollywood Allan)
____ I just want you to know that, of all the f***s I don't give, it's the one I don't give about you that I love the most. (Danny Coleiro)
____ Ordering coffee with a coworker who's a vegan. She looks at me, and goes, "I don't believe in sugar". I'm like, "Bitch, it exists!" (Crystal Lee Wolfe)
____ Hey Subway, just make everything 5 dollars forever and shut the hell up. (Jacque YoungMother Hubbard)
____ You see a raisin, I see a grape that escaped many potential deaths and lived to a wonderful old age. (Jack Olivar)
____ A girl who lives hundreds of miles away texting you "I'm drunk" is like a lasagna texting you from Italy saying "I'm delicious." (Donna Hudon)
____ This synesthesia tastes funny. And yellow. (Danny Coleiro)
____ There are 3 levels of pain. 1. Pain 2. Excruciating pain 3. Stepping on a Lego (Indigo Fayth Johnson)
____ Ughh...it's Tit for TAT, you fucking moron.... (Chesty La Rue)
____ I've always been a bad-ass. When I was little I melted my barbies and wore them around my neck! (Susan Evon Cross)
____ I've just realised that 547 of my 700 facebook friends are actually my own fake profiles. (Danny Coleiro)
____ What we need around here is more cowbell. (Howie Feltersnatch)
____ If I was a florist I'd probably be fired quickly. First time someone asked "Where are the daisies?", I'd tell them "Look on the calendaries" (Jack Olivar)
____ Did you know that a Great White shark can completely devour a human being in under 2 minutes ?..I just timed it. (Chesty La Rue)
____ You know Facebook, you're getting a little creepy with this asking me whats happening, how I'm feeling, what I'm doing etc. Next you'll be asking me what I'm wearing. (Gail Pemberton)
____ I nibbled on her ear and she sighed and said....."GET YOUR OWN DANG CORN ON THE COB!" (Donny Norris)
____ I don't need drugs to have a good time, but I do need them to get through any family functions. (Cygnus XI)
____ My apologies, I am now just blatantly wasting your time by typing absolute drivel. (Chesty La Rue)
____ I want a GPS unit with Stephen Hawking's voice. (Eric Caro)
____ Dear Facebook friends, please refrain from updating your status with weather updates as I, like most people, own windows. (Hollywood Allan)
____ Mood swings? I have a mood amusement park, bitch! Hahaha... sob. (Danny Coleiro)
____ My one friend hates it when I correct his speech, and hates it even more when I correct his writing. Especially in his diary. (Pieter Frikkie Pretorius)
____ I have a fear of speedbumps, but I'm slowly getting over them. (Cygnus XI)
____ He said the spark between us was gone. So I tasered him. I'll ask him again when he wakes up. (Trish Gill)
____ I'm not sure why you decided to discuss your cramps and extra heavy flow while in line at McDonald's but I will now take my burger without ketchup. (Susan Evon Cross)
____ I poured liquor into my pudding so I can yell out "the proof is in the pudding!"...... Just kidding. I'm a raging alcoholic. (Mike Seriously)
____ My son brought home his new girlfriend for Sunday dinner. The verdict? Flat-chested, fat cankles, and a cottage-cheese ass. Oh, and she doesn't react well to criticism. (Crystal Lee Wolfe)
____ If you think this week was a drag, wait till you see what happens next week! (Hollywood Allan)
____ "Pleasure and pain can be experienced simultaneously", she said, gently massaging my back as we listened to her Nickelback album. (Aaron Nunnery)
____ This make-up sex stuff was pretty good until she poked me in the eye with the eyeliner stick. (Howie Feltersnatch)
____ I thought that by 2013 we would have flying cars. Instead we have pocket catheters and Honey Boo Boo. (Tracy Love)
____ I wonder how many days of one's life have been wasted watching Days Of Our Lives? (Just Sage)
____ Love is: sharing your thoughts, your fears, your dreams, your hopes and your french fries from McDonald's. (Necole Monique Lafayette)
____ Honey Boo Boo’s mother has a boyfriend and you’re single...Just let that sink in for a minute. (Crystal Lee Wolfe)
____ I'm bored. I think I'll go to WalMart, find a great parking spot and sit in the truck with my reverse lights on for awhile. (Aaron Nunnery)
____ Facebook: where all your stupid questions can be answered by stupider people. (Nawknee Kuuipo K)
____ I'm studying your updates carefully. If I "like" yours, that's code for "I'll drink to that". (Edward Ng'ang'a)
____ Until you've played around with crazy, how will you recognize sanity? (Aubrey Otieno Otieno)
____ Time to make some major changes in my life. For starters, I'll be drinking and smoking three times as much as I do now. (Danny Coleiro)
____ So apparently Lance Armstrong had a ball on Oprah's show. But I understand he got a little teste. (Mark Andrews)
____ if you begin any statement with "honestly" in your argument you're lying. (Nawknee Kuuipo K)
____ For the record, peanut butter and pineapple juice enemas are a bad idea...So very bad... (Brandon Eaves)
____ To-do list: Practice pterodactyl screech for Monday morning meeting. (Javier Spartikus Malave)
____ Vodka. (Susan Evon Cross)
____ Hey, doofus, know how I know you're not writing your own status? Because you spelled everything right. (Juliet Roxspin)
____ I'm not saying you are a pain in the ass but you and a festering, red boil on a buttcheek have A LOT in common. (Susan Evon Cross)