Yes, I'm behind on posting new status updates from my FACEBOOK FAN PAGE, which happens to be the best status update source on Facebook*!

*based on a recent study of Facebook pages, conducted by me.

I still haven't made it through the thousands of status updates posted last month, but here are the first 66 I liked, in no particular order:

____ "Hello 911?" "Someone just stole my status on Facebook... yes, I'll hold." (Jack Wagon)
____ First rule of ADHD club: Never talk about..Nice hat! You ever own a hamster? I did. Died. Watch me do a cartwheel! Okay, who wants brownies? (Matt Procella)
____ From now on when I accept a friend request I'll just write on their wall: You belong to me now. (Stephanie Manera)
____ Where do we cash out these "Likes"? I need gas money, and by gas money I mean booze. (Jack Wagon)
____ Your roses are starting to wilt, the helium has seeped from your balloon, your candy is gone, you gained 3 pounds while you slept, you are left holding a Hallmark card that is identical to thousands and not special at all.... HAPPY POST VALENTINES DAY EVERYONE! (Donny Norris)
____ I'm a very modest person, mostly because I'm awesome. (Bob MuppetMan Brittain)
____ I’m in big trouble if my coworkers find out that I really don’t have Tourette’s. (Donna Hudon)
____ If I were a zebra I'd be pretty pissed they didn't name me tiger horse. (Jack Olivar)
____ Did the Jetsons ever explain why there weren't any black people in the future? (Leilani Christine)
____ Don't piss me off. I will "you! (Lisa James)
____ Say what you will about Lance Armstrong...but I think he's amazing! When I was on drugs, I couldn't even find my bike. (Shabana Essack)
____ I'm writing a funny new status about herpes, I hope you all get it. (Jack Olivar)
____ So there I was making funny faces in the bathroom mirror and I suddenly realized my ol' lady was right...I ain't never gonna grow up. (Beau Diggity)
____ I bet when Hugh Hefner dies no one will say "He's in a better place now." (Sean Shipley)
____ I ate a cracker today...forgot to post it on Instagram. *throws self down a flight of steps* (Jack Wagon)
____ Normally I can't dance to save my life, but as soon as I step in dog shit, I can moonwalk better than Michael Jackson (Hollywood Allan)
____ I just spilled 5 drops of gas, that's like $10.00 worth! (Lisa James)
____ Well, I guess now we have to change the expression to "who resigned and made you Pope?" (Dave Prange)
____ Just saved a whole lot of money on car insurance by switching to reverse and fleeing the scene. (Aaron Nunnery)
____ My wife complained that I never lifted a finger to help around the house. So I lifted a finger. Apparently, it was the wrong one. (Danny Coleiro)
____ I'd like to thank the bars for being there for me. (Lisa James)
____ MY STATUS IS BADDEST is like that little hole in the wall that has the best steak and you don't want everybody to know about it. (Mustache Mann via Donny Norris)
____ MY STATUS IS BADDEST, will you be my Valentine? Don't make me get the van. (Bob MuppetMan Brittain)
____ So... I met this girl on Monday, took her for a drink on Tuesday, we were making love by Wednesday and I don't know the lyrics after that, sorry! :( (GoldRobo Dancer Guy)
____ I hate taking the bus to work, especially when I'm late. I can never find a place to park it. (Hollywood Allan)
____ My safe word is "Let's make a baby". (Chesty La Rue)
____ This gorgeous blonde, wearing nothing but an orange top hat, came up to me today riding on a panda, and accused me of taking hallucinogenic drugs. (Danny Coleiro)
____ Sometimes you've got to ask yourself: "Why am I talking to myself?" (Eric Caro)
____ Make Tomorrow More Fun: Unplug the copier at work & put a sign on it that says “now voice activated!” Sit back & watch the magic unfold. (Javier Spartikus Malave) 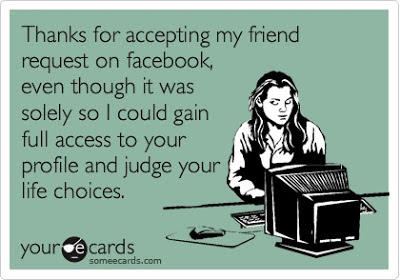 ____ Apparently shrugging your shoulders is not the correct response to "OMG!, WHERE'S MY BABY?!!!" (Donny Norris)
____ Having a Facebook page reminds me a lot of high school...I make all the guys laugh then they go out with all the pretty girls. (Julie A Ostmann)
____ Just saw there's an exercise called Burpee's. Finally, something I will be good at! I can definitely burp and pee at the same time. (Lisa James)
____ If I was an astronaut,I'd probably spend all my time trying to figure out how to get the Sun to cook that giant onion ring around Saturn. (Jack Wagon)
____ I don't know who's in charge of putting the little "tear here" signs on bags of Planters Peanuts but they need to fire his ass. (Donny Norris)
____ Just unknowingly picked up a cat turd off the floor with my bare hand, in case anyone was wondering how my night's going. (Lisa James)
____ It's been lovely but I have to scream now. (Chesty La Rue)
____ This procrastination feels like I'll be rushing to get shit done later. (Nawknee Kuuipo K)
____ Hey Lady!, I just deposited $43 dollars in THIS bank.. DON'T FROWN AT ME WHEN I TAKE 3 SUCKERS! (Donny Norris)
____ According to a recent survey, 98% of people responded with "Go away." (Danny Coleiro)
____ Handy tip for new parents : Wake up your baby by gently resting your head on a pillow. (Chesty La Rue)
____ Just got a message that said "Hey, I tried to call you"...that's your problem right there....you should have never tried that. (Nawknee Kuuipo K)
____ I just deleted my "Weather Network" app because, Facebook... (Eric Caro)
____ If you think you can charm me into bed with your smooth talking and your rugged good looks and expensive Champagne, then you Sir, are in for the night of your life. (Chesty La Rue)
____ Today makes the 42nd year in a row that I haven't wore a shirt with an alligator logo on it. (Jack Wagon)
____ When my self-delusion and your vivid imagination combine, this status is f***ing hilarious. (Danny Coleiro)
____ I was just told I was not only creepy, but Christopher Walken creepy! This is a compliment, right? (Beau Diggity)
____ Old creepers at the bar should come with a Benny Hill theme. (Lisa James)
____ The number of words in your Starbucks coffee order is equal to the number of times I wanna kick the back of your head while standing in line. (Richard Earle Crown)
____ This gas smells like I'm sniffing gas. (Juliet Roxspin)
____ Keep scrolling, I got nothing. (Aubrey Otieno Otieno)
____ When people ask for my advice, I advise them not to take my advice. That really screws them up. (Danny Coleiro)
____ I always think of something sad when peeling onions so that I kill two birds with one stone. (Gathoni Anne)
____ No one wants to see any pictures of the flowers you receive today. (Imraan Jussab)
____ I'm so lonely, I just thanked a spider for dropping by. Before I crushed him. Because I hate surprises. TEXT ME FIRST, A$$HOLE. (Nicholas Arulnathan)
____ MSIB proverb: You can't have your status and like it too. (Aubrey Otieno Otieno)
____ If you've never walked around your house looking for your phone only to realize it was in your hand, you are obviously not me. (Jack Olivar)
____ Leaving aside the obvious risk of infection, wearing your heart on your sleeve puts an unnecessary strain on your arterial system. (Chesty La Rue)
____ Busy planning my next big move. Do I lay on couch, or chill in the recliner? I've only got one shot at this, so I gotta make it count. (Hollywood Allan)
____ I hate it when people I don't like say "It just can't be done", and I have to spend the rest of my life desperately trying to prove them wrong. Anyway, I'm off to buy a hammer, a nail, some jello, and a ceiling. (Danny Coleiro)
____ I just heard "Eye of the Tiger" and now I'm motivated to conquer the world. Or at least get out of my pajamas. (Donna Hudon)
____ I really hope my spirit animal is a bear because well I would love to hibernate all winter. (Jack Olivar)
____ They say the lack of preservatives leaves Capri Sun susceptible to fermentation. I have started stocking them up in my desk! (Lisa James)
____ Nicki Minaj telling contestants they're bad singers on American Idol is like Michael Jordan telling people they're bad at baseball. (Eric Caro)
____ I remember the first guy who broke my heart. Well look at me now, Jason! I talk about mundane stuff and diarrhea to strangers on the Internet. I got a lot going on. You had your chance! (Stephanie Manera)
____ Stairs are like rock climbing after a bottle of vodka. (Dave Murawski)
____ Did I already do my deja vu joke? (Les Chinyanga)

The next 65 Facebook status updates are HERE. You are here. Thank you.