In an effort to better organize my website, I'm compiling status updates by subject. Whether it's your birthday or a Facebook friend's birthday, you can count on my FACEBOOK FANS and myself to help you avoid the obvious "Happy Birthday" wall post, which is almost worse than writing nothing at all. These have been collected over the course of several years. You may see a status update you have seen before. If this angers you, please send an email to my assistant at idonthaveanassistantyouidiot@yahoo.com. Thank you!

____ hates it when I'm trying to Facebook stalk someone and I realize I have to scroll through 100 lame birthday wishes before I can get to their good stuff again. (MSIB)
____ I wonder if the Happy Birthday wishes I send out to my Facebook friends would mean the same to them if they knew that I was sitting on the toilet. (Donny Norris)
____ Nobody wished me a happy birthday today, which isn't surprising really, since it isn't my birthday. (Mike Foster)
____ Thanks for all the birthday wishes, and screw everyone that forgot. (John E. Shalberg)
____ hates it when I get invited to weird events on Facebook. For the fifth time, I do not want to go to your cat's birthday party, freak. My dog is getting married. (Julie A Ostmann)
____ Thanks for the birthday wishes from everyone who noticed my name today in the upper right corner of their Facebook page. (Sherry Dyson)
____ My mom loves to remind me of that birthday where I ran around in my diaper throwing cake at people. ITS BEEN A WHOLE YEAR MOM, LET'S MOVE ON. (Gerti Kola)
____ Liking all the "Happy Birthdays" on your friend's wall at 2 am is the best way to say "Screw you, birthday boy." (Rory O'Donnell)
____ People who clap at the end of movies also join in singing "Happy Birthday" at a restaurant for a stranger. (Shafique Khatri) 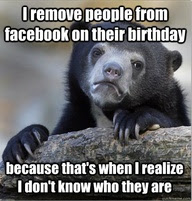 ____ Yeah..yeah...okay, I get it. Years ago, your son shot right out of your vagina. Alright, calm down. Happy Birthday to him. (Stephanie Manera)
____ Lazy Rule #12: when you don't want to type a "Happy Birthday" wish on someone's Facebook wall, just "like" the top greeting on the page and move on. (Sarah Mode)
____ I feel like a ninja when I wish people a Happy Birthday on Facebook at 12:01am. (Laurie Hicks)
____ The ridiculous situation when you discover that 31 of your Facebook friends share the same birthday and you only actually know 1 of them but there are three others that you converse with regularly and you don't feel like spending the time it will take to wish them all well so you decide to just pick the 4 out that you are the closest too but then you think, "OMG, what if the others notice and it hurts their feelings?!!", but then you think, "Hmmmm, isn't it kind of arrogant of you to think they would even notice?", then you begin to question your own character and opt to just type Happy B-day on all of their walls and spend the rest of your day searching your soul. (Donny Norris)
____ At kids birthday parties I like to play a game with my best friend called "Go to the bathroom and snort cocaine."(Chesty La Rue)
____ The day after my birthday I changed my birth-date to the next day to test a theory. Yup, nobody cared then either. (SamGirl Sunday)
____ Facebook has made it completely impossible to complain that you were unaware of your friend's birthday. (MSIB)

Do you have a Facebook Status update about birthdays and you'd like to receive a virtual pat on the back? Post it on my FAN PAGE.