Not surprisingly, one of the most popular subjects discussed on my FACEBOOK FAN PAGE is Facebook. We like to poke fun at Facebook, our friends on Facebook, the subjects currently being discussed on Facebook and so much more. Then, I sort the best ones by the amount of likes they receive. Here are a few of my favorite all-time status udpates about FACEBOOK. Thanks to everyone who has shared these over the years and continue to make the page the most original status update source around.

____ If you don't have Facebook...what do you do with your drunken rants and pics of food that nobody wants to read or see? (Mustache Mann)
____ A few short years ago, I had no idea what to do with all the unflattering pictures I took of myself in the bathroom. Not anymore! Thanks, Facebook! (MY STATUS IS BADDEST)
____ Facebook is the adult way of having imaginary friends. (Gail Pemberton)
____ If you have over 600 friends, you should NOT have to take a picture of yourself. (Mike Foster)
____ I wear a trench coat so that when people unfriend me I can just grab my boombox and stand outside their window with it over my head until they agree to take me back. (SamGirl Sunday)
____ I often refrain from using the word 'f*ckwit' on Facebook because I'm worried it might automatically tag a million or so people. (Danny Coleiro)
____ "You have the right to remain silent so as not to incriminate yourself." ~5th Amendment, understood by nobody on Facebook. (Nikki Sholar)
____ Some guy stole my status last night, re-worded it, and got more likes than I did. It was a friendly competition in the beginning. Now he's dead. Who wants to go ice skating with me? (Juliet Rockspin)
____ The stupid Facebook Timeline is completely ruining the whole "Drink Till You Forget" concept. Now I have a drinking problem AND get to remember everything. (Wendy Lee Norried-Herrera)
____ Just reached 241 Facebook friends. IS THAT GOOD ENOUGH FOR YOU, DAD?!?! (Jacob Grant) 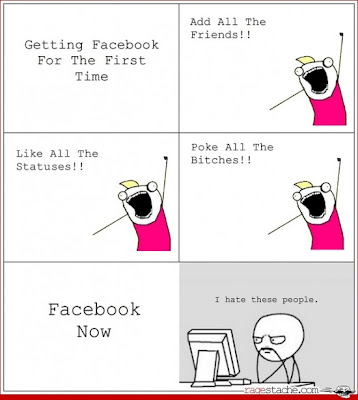 ____ When filling out a resume, is "Facebook friends" capitalized? (Justin John Bernard)
____ I like having an ex-boyfriend...it gives me something to do on Facebook at 3 in the morning. (Carrie Danley)
____ I am so tired of not being able to swear in my statuses since my family got Facebook. So f*ck it. Sorry grandma. (Chris Hallman)
____ Note to self: Asking the cop if you could use his in-car computer to update your Facebook status in no way helps you gets out of a DUI. (Sharon Petracek)
____ I'm at a red light and this is all I have time to post. (Donny Norris)
____ If it weren't for Facebook, I wouldn't know what to do with all these pictures of my lunch I had lying around. (William Hale)
____ Well, just 8 more hours of Facebook and I can go back to bed. *phew* (Mustache Mann)
____ when I die, they will look at my Facebook statuses and realize that my life was not wasted. (Eric West)
____ Wow, some people will do anything for a "like" on Facebook. Anyways, if you agree like my status. (Jason Rossi)
____ I don't know how many girls it takes to change a light bulb, but I guarantee we'd post pictures of us doing it on Facebook. (Kylie Toyne)
____ I will not argue with idiots on FB. I will not argue with idiots on FB. I will not argue with idiots on FB. I will not argue with idiots on FB. I will not argue with idiots on FB. (Chris Batchelor)
____ Who needs the movies? Everything is right here on Facebook...Explicit Language, Sex, Drama, Suspense, Conspiracy to commit murder...Oh hold up that's in my house...Oh well it's on Facebook too. (LaDonna MsCarol Reed)
____ I find it shocking that none of my High School classmates that made my life miserable for four years and sent me a friend request on FB, have bothered to post on my wall today! I'm starting to think we may not actually be friends. (Rae Broman)
____ Roses are red ; Facebook is blue. 0 mutual friends; Who the hell are you? (Enem Paul)
____ I put my Facebook status as "I kissed a girl" and then I liked it. (Daivys Burgos)
____ whenever a Facebook friend shares bad news, I try to cheer them up by hitting the "like" button and commenting "lmao"! (Brad Smith)
____ I don't even know 75% of the people I'm friends with on Facebook. Why, then, do I get so upset when I see that my friend count has gone down by one? (Jacob L. Grant)