Ahh, it's almost TAX DAY, Americans (April 15th). I've gone through my past blog posts to find the funniest status updates about this hideous time of year in which we fill out forms we know nothing about and hope to get money and stuff back from the government. Enjoy!

____ is looking for friends with tax benefits. (Lisa James)
____ would have gotten a lot more back on my taxes if I could claim co-dependents. (MY STATUS IS BADDEST)
____ I got BOMBED tonight and decided to do my own taxes and guess what! I'm getting 4 million dollars back this year! (Bob MuppetMan Brittain)
____ Turbo Tax might just be the worst video game I've ever played (Justin Sayson)
____ Oxymoron of the day: Tax Return (Cory Nation)
____ DID MY TAXES AND GOT SOMETHING BACK! The tax preparer turned his head and I made off with a stapler and 3 pens. (Donny Norris)
____ gets euphoric when I get my tax refund until I realize it was my money to begin with. (MY STATUS IS BADDEST)
____ Just did my taxes, guess what? I owe the government 1 kidney, my first born child and 3 million dollars. I hate these new tax laws. (Gwen Masterson) 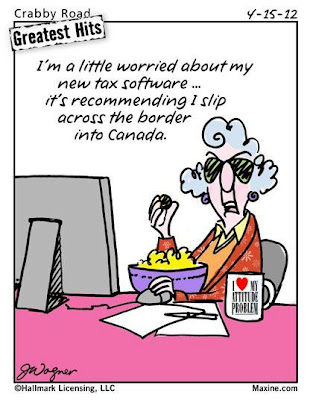 ____ has been declared "legally dead" for tax purposes. (Scott Brady)
____ Just taught my kids about taxes by eating 38% of their ice cream. (Dave Fletcher)
____ I got my tax refund yesterday. Now, I'm just trying to decide which vending machine to spend it at. (Sheree D. Mastern)
____ Can I add the voices in my head as dependents on my taxes? (Mhalou Diaz-Consengco)
____ Hey folks, don't forget to pay your taxes this year so the government can give it to people that don't feel like working.
(Jeff Raynor)
____ "When it comes to taxes, there are two types of people. There are those that get it done early, also known as psychopaths, and then the rest of us." –Jimmy Kimmel
____ I take a bite of all my kids desserts to teach them early that life isn't fair and someone is always taxing your piece of the pie. (Nawknee Kuuipo K)
____ H&R Block said I won't get nearly as much back in taxes this year because apparently the neighbors want to claim their own children. (Gerti Kola)
____ It bothers me when I see tax money wasted on signs telling deer where to cross the road. (Mhalou Diaz-Consengco)
____ "A dollar saved is a quarter earned." -Oscar Levant
____ "Income tax returns are the most imaginative fiction being written today." -Herman Wouk

FYI: I grace my Facebook Fan page with new status updates daily. Click HERE to become a Fan on Facebook! I will publish those that my twisted mind enjoys.