Love is expressed in many ways: A letter, a touch, a special song that says exactly what you are thinking but can't find the words to say yourself. Yes, there are many romantic ways to show love. Even on Facebook.

____ "Are you single?" "No, I'm in a committed endless discussion about where to have dinner." (Imraan Jussab)
____ The self-checkout line was invented by a guy who was sent to the store to buy tampons. (Karanbir Singh Tinna)
____ I think once we get past the restraining orders and the court dates and the stalking charges, we can really make this relationship work. (Gwen Masterson)
____ You call it stalking...I call it a complicated long distance relationship with lack of effort to make this thing work on your part. (Nikki Sholar)
____ You call it Russian Roulette. I call it coming home to my wife every day. (Hollywood Allan)
____ that awkward moment when you realize your husband DOES check Facebook. (Andi Rogers)
____ "In an unhealthy relationship" should definitely be a Facebook option. (Sean Shipley)
____ I live by my own rules (reviewed, revised, and approved by my wife).. but still my own. (Adam Apple)
____ Internet dating: the odds are good but the goods are odd. (Sherman Dee Moose)
____ Can somebody lower their standards and fall in love with me, please? (Seb Diesel)
____ Some consider Romeo and Juliet a tale of true romantic love. Sure, if you consider 2 underage kids in a relationship that lasted 3 days causing 2 suicides and 3 murders romantic. (Dave NoMoneyhoney Blum)
____ If you like someone, tell them. Or just stalk them on every social network and cry yourself to sleep every night. It's whatevs. (Matt Procella)
____ It's better to have loved and lost than to have me punch you in the esophagus. (Bob MuppetMan Brittain)
____ Every now and then I like to reflect on marriage and think to myself, "Where would I be, if not for my husband?" Then I get all depressed and have to stop because I keep coming up with all these great answers. (Stacy Fournier)
____ You hate yourself? Cool, I guess we do have something in common. I hate you too. Let's date. (Mustache Mann) 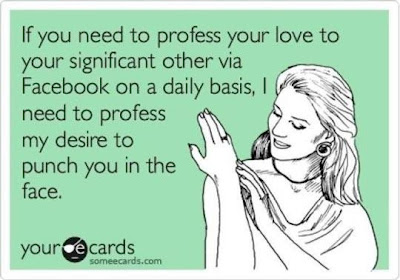 ____ As I sit here in my boxers playing xbox, drinking beer, and covered in cheetos dust with a gravy stain on my shirt; I can't help but wonder, how am I still single? (Sean Shipley)
____ Calling your girlfriend your "lady friend" is a great way to let everyone know you both met on Craigslist. (Rita Filakia)
____ There ain't no mountain high enough to keep me from getting to you. Unless its an actual mountain. Then forget it. (Ember Sclafani)
____ I thought that stalking my stalker would be a good idea, but we've both been stuck up this same tree for three days now. (Danny Coleiro)
____ You had me at "what's a restraining order?" (Mustache Mann)
____ I love watching Facebook relationships flourish into beautiful bonds...then watching them burn into a miserable and horrifying crash. (Jesse A Kinkead)
____ If your girlfriend claims to never look at your Facebook profile, change your status to "single" and wait 5 minutes. (Cassie Tarner)
____ Never try to be someone you’re not, because then people are like, “Hey! You’re not my husband!” and then they call the police. (Rick Montgomery)
____ I always give women flowers after we've gone out for a week or two since they usually need cheering up at that point in our relationship... (See More)