Albert Einstein once said, "If A equals success, then the formula is A= X + Y + Z. Where X is work. Y is play. Z is keep your mouth shut." My readers have ignored Albert, thankfully, and have shared a bunch of humorous Facebook status updates about jobs. These will be particularly helpful for those of you about to graduate and enter the workforce. This is your future:

____ I wonder if I can figure out a way to get a hologram of myself to go to work tomorrow? (Beau Diggity)
____ My dream job is to be that guy at the mall who plays with those remote controlled helicopters all day. (Karanbir Singh Tinna)
____ Just got back from a job fair. Very disappointed. They didn't have one damn ride. (Shafique Khatri)
____ Listening to customers at work has taught me just enough Spanish to engage Spanish-speaking people in the worst conversation they've ever had. (Dave NoMoneyhoney Blum)
____ "Okay. Everyone here hates you and hopes you die" is, apparently, not what your boss is expecting when he exclaims "Tell me something I don't know!" (Danny Coleiro)
____ I don't have to be sitting on the "dock of the bay" to waste time, I do it perfectly fine in my office chair. (Crystal Mann)
____ If there are cameras in the elevators at work I'm in big trouble. (Toni Daniels)
____ I could never work for CSI. I would always want to run through the yellow crime tape like I just came in first place at a marathon. (Mike Seriously)
____ I love when my boss tells me I can work from home because, well, naps. (Jack Olivar)
____ Some people say I’m a dreamer, others say, “If you fall asleep at work again we’re going to have to let you go." (Mike Seriously)
____ If falling asleep at work is wrong.....I don't wanna be caught. (Rob Parsley)
____ I think I will get a piece of canvas and draw a face with my left hand and my eyes closed, splash it with purple, red and black paint, call it "Disconnected" or some such crap...sell it for 1.8 million and retire. That's my plan. (Donny Norris)
____ Wrote my resume on a bar napkin. I got the job and they're sending me away on a 30 day business trip and they give you free key chains! :) (Jack Wagon)
____ I'm running out of reasons to call into work. Do you think "emergency circumcision" is a good excuse? (Beau Diggity)
____ The only thing I'm really learning from this 401K meeting at work is that I'll probably never be able to retire. (Stacy Fournier) 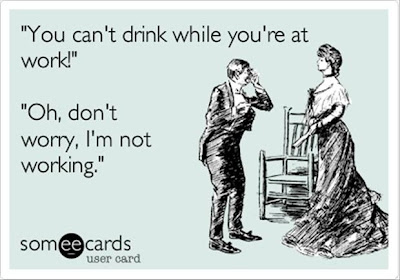 ____ Happy (outsourced) Labor Day! (Brandon M)
____ In 1987, my teacher made me write "I must hand my work in on time" five hundred times. Pointless activity, if you ask me, but anyway...I'm finally done. (Danny Coleiro)
____ This is ridiculous - I have so much work to do, I can barely get on Facebook. My boss is rude. (MY STATUS IS BADDEST)
____ If you respond to coworkers asking how your weekend was with turkey noises, they leave you alone. (Tom Guntorius)
____ Apparently the height of my business success occurred at age 14 while playing Monopoly. (Jack Olivar)
____ I'm not a doctor but I play one on Match.com. (Mike Seriously)
____ I worked as a photographer once and shot some weddings. Sooo much blood. (SamGirl Sunday)
____ FYI wearing camouflage at your desk so no one sees you sleeping doesn't work. (Thomas Christopher)
____ At work during break, I sometimes stand by the coffee machine and wonder if a beautiful co-worker will come by and pour coffee over herself in slow-mo. That would be hot! (GoldRobo Dancer Guy)
____ So how long does this MSIB season last? I kinda need to get back to my job and stuff. (Nathan Drake)
____ I just walked into my coworker's office out of the blue, hugged him, and said "Hey, bro. For what it's worth, I think it was bullsh*t and I'm gonna miss you!" Then I quickly walked out while he frantically shouted "What? What?!" behind me. Hahahaha (Donny Norris)
____ I had a bit of a lazy day sitting in my underpants looking for jobs online. My boss was furious. (Hollywood Allan)
____ Unfortunately, at no point during my workday, does anyone ever have a reason to shout my name and then toss me a sword. (John Jordan)

Do you have a funny status updates to share about working (or not working, for that matter)? Become a FAN ON FACEBOOK and post it! Thanks for reading! Oh, and a special congratulations to Maria Dugo -my favorite graduate. You will go far in life, provided you don't listen to me or any of these people on my blog. Good Luck!