___ I think I've found the perfect cure for hangovers, guys. This morning I dunked my bagel in vodka and put some olives on it. I'm calling it the martini bagel. (Jack Olivar)
____ If you see a plate of bacon running down the street screaming "HELP ME!" please return it to me. It's totally overreacting. (William Hale)
____ An easy way to "have your cake and eat it, too" is to buy two cakes. (Chesty La Rue)
____ Unless life hands you water and sugar, your lemonade is gonna suck. (Erek Beard)
____ All hope was lost. All faith was extinguished. Then, I found a bag of Cheetos on top of the fridge. (Juliet Roxspin)
____ I think my favorite part about Facebook is that no one can tell when I'm rubbing ice cream on my chest. (Chesty La Rue)
____ This bulk box of peanuts I got from Costco tastes like styrofoam. :( (Jack Wagon)
____ There had better be cheese at the end of this maze.  (Hollywood Allan)
____ My spirit animal is a hollow chocolate bunny. You know, the one with the ear bitten off. (Stephanie Manera)
____ Whenever anyone's all like "this is my jam", I'm all like "I prefer strawberry". (Jack Olivar)
____ I was halfway through a recipe when I read the instruction "Now chill in fridge for at least two hours". I only managed 30 minutes. I was freezing. (Hollywood Allan)
____ To supplement my income, I bought a food truck. After people pay, I simply drive away...100% income! (Dave Murawski)
____ I just saw the cast of Jersey Shore! Oh wait... That's just a pile of oranges. (Cory Nation)
____ If you cut up your pizza in little pieces, you can use them as a topping for your other pizza. (Kelly-Brooke Collins)
____ If you don't put your leftovers in Tupperware for at least two weeks before throwing them in the trash, you're doing it wrong. (Jack Wagon) 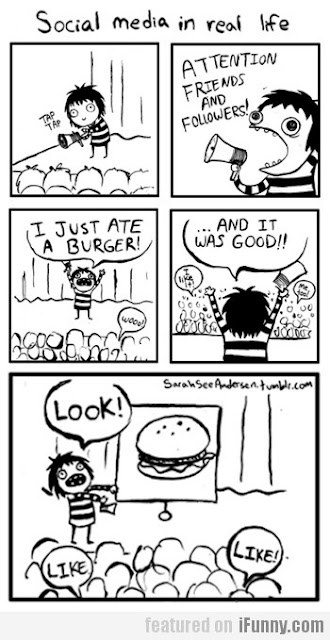 ____ Considering it's only $55/year, Costco is like the cheapest restaurant ever, isn't it? (Jack Olivar)
____ To the girl Scout that tried to sell me Carmel delites. Eff you, they will always be called "Samoas". (Nawknee Kuuipo K)
____ I'm not saying Burger King is slow, but I ordered the Angry Whopper & by the time I got it we were on speaking terms again. (Mo Ron)
____ I don't know how many calories are in these Shrinky Dinks...but they taste like sh*t. (Jack Wagon)
____ If you'd like to watch some real Hunger Games, catch me towards the end of the month after all my bills have been paid as I hunt for food in my kitchen. (Just Sage)
____ I saw guy at the store hand his girlfriend some “cutie” oranges and say “you're the real cutie.” Then I went to the bedding aisle and screamed into a pillow. (Michael Brown)
____ Eating 2 year old trail mix and updating my status about it because I'm one fearless bitch who's not afraid to be judged. (SamGirl Sunday)
____ Just ate three cans of Spaghettio's and threw up violently. Now I know how Stephenie Meyer wrote the Twilight series. (Danny Coleiro)
____ Last one to like this is a rotten egg! (Mike Seriously)
____ Good news! This stigmata on my body turned out to be barbeque sauce. (Shabana Essack)
____ CNN reports a teenager invented a 20-second phone charger and an 80-year-old climbed Mt. Everest. I ate a donut in four bites. (David Blue Smith)
____ I wonder how long I'll be skinny from all this dieting and juicing I've been doing. 1 month? A year? A couple of ye....ooh look cake. (Stephanie Manera)
____ There's never been a lazier group of people than the ones that settled on naming a candy bar "Whatchamacallit." (Mike Seriously)