IT'S THANKSGIVING, PEOPLE. I FOUND SOME OF THE BEST FACEBOOK STATUS UPDATES ABOUT THANKSGIVING:

I'm thankful that the people on my FACEBOOK FAN PAGE care enough to share their Facebook status updates about being thankful, or not being thankful, or rotten turkey, or various uses for turkey basters. They share a lot of information, actually. Too much...just like my own family, on Thanksgiving and every other day of the year. HAPPY THANKSGIVING!

____ Walmart will be open on Thanksgiving evening, in case you need another Butterball or want to beat your children in public. (Stacy Fournier)
____ My favorite part of Thanksgiving is when I sit by myself and have Jim Beam and Skittles, just like the pilgrims. (Tom William)
____ I'm going to write a book called, "How To NOT Hate Yourself After A Thanksgiving Meal". It's going to be completely blank. (Jordan McDaniel)
____ This year I'm celebrating Thanksgiving the old-fashioned way. I'm going to invite everyone in my neighborhood to my house for an enormous feast. After that I'll kill them and take their land. (Captain Jerk)
____ Sitting at home all alone eating pizza and drinking rum and Coke. Best Thanksgiving ever! (Sean Shipley)
____ My family thinks I'm not going to drink this Thanksgiving. Little do they know, I've got 8 bottles of Vanilla extract hidden in the spice rack. (See More)
____ I hope this is the year Charlie Brown says "screw the football" and kicks Lucy's head off. (Bob Brittain)
____ Why is everyone telling me to have a "Happy Thanksgiving"? Isn't it enough I have to be thankful now you want me to be happy about it? (Julie A Ostmann)
____ Yeah, I wear sweatpants and a band shirt to Thanksgiving dinner because I'm classy. (Corey Watts)
____ Hau'Oli Mahalo Kokua! ~ Happy Thanksgiving to all!!! (Stephanie Manera)
____ Does anyone else find it ironic that Americans spend the most money on new things the day after they say they're grateful for what they already have? (Deb Esposito Corcoran)
____ If you tell me to be at your house at noon for Thanksgiving dinner and it's still not ready three hours later, I'm going to stab you with a fork. (OverDose)
____ I like to think that somewhere tonight a turkey that talks like Sean Connery has successful orchestrated an escape. (Donny Norris)
____ I have a few Thanksgiving jokes, but I'm saving them for when I'm hiding in the bathroom from my family. (Mike Seriously)
____ I was too lazy to make Thanksgiving dinner, so I just put pics of what it MIGHT have looked liked on the table for the kids. Clean up was easy though. (Mustache Mann)
____ You know that one relative you hate inviting to thanksgiving because he may flake out on everybody and you don't know if it's safe to keep any silverware around him? I'm doing better. (Dorraj Koob)
____ I can hardly wait for Thanksgiving so I can see Uncle "What's His Name" and catch up with those other people. (Donny Norris)
____ If you've never seen a guest pretend to give someone a turkey baster enema before, apparently you've never invited me over for Thanksgiving before. (Jack Olivar)
____ I just couldn’t wait to get here for thanksgiving so I can hear what everyone will say about why they're thankful for me (Adam Apple)
____ "Only one more day before I'll be elbow deep inside a dead animal's carcass" ~ Thanksgiving stuffing (Jack Olivar)
____ Happy Thanksgiving to the biggest bunch of lonely, offensive, dysfunctional, alcoholic, self-gratifying, pompous, rude, sarcastic, ugly, sunlight-hating, foul-mouthed people around. No wonder I like you all so much! (Bob Brittain)
____ I hope I thawed these Hungry Man turkey dinners long enough..... (Mustache Mann)
____ Thanksgiving at my house is usually served with a hearty dose of guilt, shame and regret.. followed by a piece of, am I really related to these people and a nice glass of what the hell. (Toni Daniels)
____ Decided to lay down, unbutton my pants and watch football after my Thanksgiving meal. The manager at Applebee's was not happy. (Toni Daniels)
____ It's that time year again where I'm always asked- "Is that a turkey in your pants, or are you getting arrested?" I'm getting arrested. (Mike Seriously)
____ I went out to the car to put the frozen turkey that the company gave me for Thanksgiving in my trunk and found the one they gave me last year..... Explains the smell. (Donny Norris)
____ May your stuffing be tasty, may your turkey be plump, may your potatoes and gravy have a nary lump. May your yams be delicious, And your pies take the prize, and may your Thanksgiving dinner stay off your thighs! HAPPY THANKSGIVING ALL.......... (Shafique Khatri)
____ I'm really good at using the turkey baster as a sword and getting drunk and not being invited to Thanksgiving anymore. (Jack Olivar)
____ THANKSGIVING: Family Dysfunction at its best. (Dotty Joyner)
____ Every time a Christmas tree is lit before Thanksgiving, an elf drowns a baby reindeer. True Story. (Jerry Hoffmann)
____ Apparently in 1963 some starving pilgrims ate some indians and molested turkeys or something like that. I didn't really pay much attention to history class. Anyway to my extended MSIB family (who by the way I like much more than my actual family) Happy Thanksgiving! (Sean Shipley)
____ In the spirit of Thanksgiving I think I'll update my status in the same room as my family. (SamGirl Sunday) 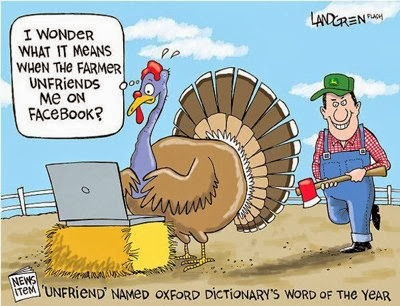 ____ The thing I like best about dinner rolls is that they give me something to soak up my tears with while I eat my Hungry Man turkey dinner by myself. :( (Mustache Mann)
____ I'm thankful for vodka and for having the type of family that will make sure I feel the need to drink mass quantities of it today. (Bob Brittain)
____ This Thanksgiving, I'm thankful that we don't celebrate Thanksgiving here. (Danny Coleiro)
____ The family and I decided to to smoke the turkey this year. It was awesome.... but then we were still hungry and had a bad case of the munchies. :( (Mustache Mann)
____ Happy Thanksgiving, Everyone! Except you, Nickelback. You guys should just shut up. (Thomas Christopher)
____ This year, for Thanksgiving...I am apparently drunk texting everybody in my phone book to let them know I am "thinking about them....and we have various issues to discuss". (Rae Broman)
____ Time to start thawing the Thanksgiving hot dogs ?? (R Scott Gilmore)
____ We may not celebrate it here, but in the spirit of Thanksgiving, I'm eating a kebab. Because it comes from Turkey. (Danny Coleiro)
____ Watching the Macy's Thanksgiving Day Parade and all those big balloons reminds me that I'm fat and that could be me next year. (Bob Brittain)
____ Ooo Ooo, you know what I'm super excited about? THE THANKSGIVING DAY PARADE!! ~ Boring people (Donny Norris)
____ How To Cook A Turkey:
Step 1: Go buy a turkey
Step 2: Take a drink of whiskey
Step 3: Put turkey in the oven
Step 4: Take another 2 drinks of whiskey
Step 5: Set the degree at 375 ovens
Step 6: Take 3 more whiskeys of drink
Step 7: Turk the bastey
Step 8: Whiskey another bottle of get
Step 9: Ponder the meat thermometer
Step 10: Glass yourself a pour of whiskey
Step 11: Bake the whiskey for 4 hours
Step 12: Take the oven out of the turkey
Step 13: Floor the turkey up off of the pick
Step 14: Turk the carvey
Step 15: Get yourself another scottle of botch
Step 16: Tet the sable and pour yourself a glass of turkey
Step 17: Bless the dinner and pass out (Shawn Troxel)
____ May your Turkey be Wild and your Cranberry be mixed with Grey Goose! (Jason Wright)
____ So, Thanksgiving is "relatively" annoying. (Adam Apple)