My FACEBOOK FAN PAGE has been the best place to find unique Facebook status updates for four years now!* I've found the most-liked status updates from this date, 8/28, starting in 2011:

____ The judge says I'm a repeat offender, but he always says that. (Mike Seriously)
____ In case anyone was wondering how hot it is outside, I just saw a couple of Hobbits running by my house carrying a ring. (Gary Hensley)
____ Is bikini season almost over yet? I'm freaking starving. (Olivia May)
____ I bought a new thesaurus today. It's nothing to write house about. (Karanbir Singh Tinna)
____ Don't you hate when you do someone a favor and they get all angry?! I will never spit shine another persons glasses ever again... (Miguel Munoz)
____ "Hey! I have nothing to do! Please everyone come talk to me and give me more work!" - The impression I apparently give off whenever I am completely overwhelmed at the office. (Stacy Fournier)
____ I hate it when people call dogs "stupid". I mean, when was the last time you saw a dog step in human poop? (Rajat Behl)
____ Automatic flush sensors look an awful lot like hidden cameras. (S.r. Furst)
____ I once dated a girl with a parrot. That thing was crazy and never shut up! The parrot was cool though. (Enrico Hartzenberg)
____ I suffer from narcolepsssssssssssssssssssss (Danny Coleiro)
____ I kinda hope there's an escalator to heaven and not a stairway. I am kinda lazy and would hate to miss out. (Jack Olivar)
____ My doctor asked me if I drank alcohol. I said no. We laughed... (Angel May West)
____ It's not a real hangover until you bring a pillow into the bathroom. (Donna Hudon)
____ A cop pulled me over for weaving. I guess there's a law against making baskets while driving? (Mustache Mann)
____ I'm gonna call that ninja move "Upper Leg Cramp, Crying Father."  (Todd Landon Wildig)
____ I found a library book I never returned from 2009. Luckily, I have no attachments and can hit the road. Start fresh somewhere new. (Karanbir Singh Tinna)
____ My friend wanted to meet someone the old fashioned way, so I offered sheep and land to a man she didn't know if he agreed to take care of her. (Coleen Sayers Bartay)
____ It's time to admit that as a species, we are just not ready for 4-way stops. (Karl Tate)
____ Hey. Guys. Hey. Guys guys guys. Are we, like, 1000% sure there's no caffeine in Red Bull? (Les Chinyanga)
____ "Oh Sh*t!!!!" - Flies (Lisa James)
____ If you read your timeline backwards it is about a person who hates everything and gradually becomes happier until they get a life. (Matt Storm)
____ Pepsi...for when they run out of Coke. (Fifi La Rue)
____ Some ugly person just called me shallow. (Karanbir Singh Tinna)
____ I don’t think my boss appreciated me jiggling my butt in her face this morning. But, in my defense she told me to “get twerk”. (Wi N Ter) 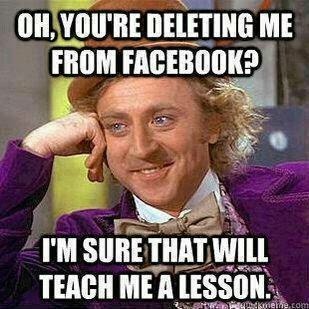 ____ You've never been truly drunk until you've had to use a barstool as a walker to get home. (Joey Guy)
____ Could you Trojan® imagine if we Absolut® got free product McDonald's® just by Budweiser® mentioning them? I mean Nike® really!? Taco Bell® (Jack Wagon)
____ Sometimes I feel like an idiot. But I am an idiot, so it kinda works out. (Sean Shipley)
____ "Oh come on kid, stop playing with that goddamn crank" ~ Jerk in the Box (Jack Olivar)
____ I hate when I'm in my underpants making a sandwich and the manager at subway walks up and says you're fired. (Karanbir Singh Tinna)
____ I'm sorry I got salsa on your baby, and I'm extra sorry I scraped it off with a chip. (Karen Burroughs)
____ BAM! I am officially green now! Well, sort of...I finally figured out how to steal electricity from my neighbors. (Beau Diggity)
____ Age sure changes your perspective. Lots of things I used to hate when I was younger, I love now... Like having nothing to do, going to bed early, watching the news, spankings...stuff like that. (Dave Prange)
____ Show me on the back of your mini van window...where your life went wrong. (Jack Wagon)
____ I hate when pple tries to corrects peeeple on ghrammer on somethin as informal as facebk! (Clinton CWalka Walker)
____ "You have the right to remain silent so as not to incriminate yourself" -- 5th Amendment, understood by nobody on Facebook. (Sheena Childress)
____ The FAA has now banned tweezers. Personally I think anyone who can hijack a plane with tweezers deserves the plane. (Karen Burroughs)
____ The strangest thing happened at work today. A co-worker who walks around the office saying "Living the dream" was mysteriously stabbed 37 times in the neck with my car keys. (Sue Miklaucich)
____ "Grocery shopping" is really just a euphemism for spending $20 on enough frozen food to last 2 weeks and spending the rest of your viable paycheck on alcohol. (Tyler Kattrein)
____ "I want to use my brain... just not that much." -Those folks who do the People© Magazine crossword puzzle (Steven Nibur)
____ Sorry just got your text. Do you still need to go to the hospital? (Leslie Hagen Wuest)
____ "This is where I sh*t." - Sean Connery showing people chairs in his house (Tom William)
____ I don't consider it a typo as much as I consider it a new way to spell a word. (Amanda Williams McSweeney)
____ Facebook would be way cooler if it was on t.v. : "In other news, Brian's ex-girlfriend is still a cold, heartless bitch. Details at 11". (Shabana Essack)
____ To be frank, I find the excess use of profanity used here rather unsettling and more than a bit shocking. Luckily, I'm not Frank. He's a f***ing tosspot. (Danny Coleiro)
____ "Objection! That's "allegedly" killed the cat, your honor" ~ Curiosity's lawyer (Jack Olivar)
____ I know my ABC's A. She's always right B. I'm always wrong C. I will get some if I follow A and B. (Mustache Mann)
____ Nooo,  I didn't say you WERE stupid.  I said, you ARE stupid. There is nothing past tense about it. (Mustache Mann)
____ Sometimes I like to go to Costco, pull up a milk crate next to the food sample lady, whip out my Easy Bake Oven and say... "Game on bitch!" (Jack Wagon)
____ My dentist told me to come back in a week for my new crown. I was super excited about it too until I showed up at his office and realized he was talking about a porcelain tooth. (Stacy Fournier)
____ I'll bet volcanoes erupting are just the earth throwing up after a bad night of drinking. (Jack Olivar)
____ “Go out there and get your ass kicked by Steven Seagal” - Script for everyone else in a Steven Seagal movie, probably. (Gary Hensley)
____ I'm not gonna lie: Every time I stop at a red light, I hope that those Chinese guys from "Better Off Dead" pull up beside me. (Jack Olivar)
____ Child has asked for a mood ring at least a million times today. I'm not quite sure how I feel about this. Damn it, I need a mood ring. (Donna Hudon)
____ Sometimes I like to watch TAPS and imagine I'm investigating the paranormal and that I don't owe Visa $8,000 for a Ghostbusters Proton Pack. (Jack Wagon)

*According to a recent survey, conducted by me.

Will you BECOME A FAN on Facebook today...or will you be a jerk? The choice is yours.