Thank you for your patience as I catch up on the most-liked status updates posted to my FACEBOOK FAN PAGE in 2014! Until then, here are the most popular Facebook status updates from this year, so far:

____ I've deleted enough stupid Facebook posts to realize I should never, ever get a tattoo. (Steven Nibur)
____ As a new mom, I'm constantly given unsolicited advice now. "Get on a schedule," "Sleep when she sleeps," "Stop feeding your baby French fries." Ugh, mind your own business, people! (Stacy Jane)
____ If you fill a Whoopee cushion with gravy it adds a great new twist to a classic practical joke. (John Geiger)
____ If "The Breakfast Club" were made today, it would be a silent film about 5 kids staring at their phones. (Javier Spartikus Malave)
____ I hate snakes because they have no feet. You could say I'm...*looks straight at the camera* lacktoes intolerant. (Karanbir Singh Tinna)
____ Its nice that the price of gas has been the lowest in 14 years because so is my income... (Joann Sullivan)
____ I'm perfecting a new perfume called "Forever Alone". It smells like Lean Cuisines and cats. (Jack Thomas Jr.)
____ Some day I wanna be "change my oil every 3000 miles" rich. (Tim Darling)
____ Unless your kids fundraiser is selling whiskey, I'm not really interested. (Lori Anne)
____ Hate when the grammar nazis single me out like some kind of which hunt. (Seb Diesel)
____ Hey sweetie, I'd love to play Connect Four®, but not right now. Daddy loves you so so much, but Daddy is very busy right now trying to get people inside his phone who didn't like me very much in high school and whom I haven't seen in almost 30 years to laugh. (Steven Nibur)
____ Every time I get an eyelash in my eye, I'm reminded of how quickly I would die in the wild. (Tyler Kattrein)
____ I wish I liked anything as much as young, white girls like sending drunk snapchats. (Victoria Beaver)
____ Before coffee: Hates everybody. After coffee: Feels good about hating everybody. (Imraan Jussab)
____ I'm the perfect man if you don't factor in looks, depth of character, emotional availability, intelligence or financial well being. (Sean Shipley)
____ I've been around the block a few times, but then my neighbor realized I was drunk and helped me into my house. (Joey Guy)
____ Fitness level: I pulled a muscle in my ass by crossing my legs. (Jennifernjason Meek)
____ Hi guys! Steven is really handsome and very sweet and successful and often very funny though sometimes a little inappropriate. Are there any nice girls interested inMOM PLEASE GET THE HELL OFF MY FACEBOOK YOU'RE RUINING EVERYTHING (Steven Nibur)
____ My Superpower is the ability to regulate my core body temperature to both extremes by simply placing my bare foot outside the blankets.(Kirk Wilson)
____ Just finished putting up a windmill on top of the house. It started out as a TV antenna but the wind was blowing and i got tired. (Jediah Creekwood)
____ This status will be seen by tens of people and liked literally ones of times. (Karanbir Singh Tinna)
____ I fell asleep on the couch with my E-cigarette in my mouth and the next thing I know my whole house is up on the internet. (Just Sage)
____ I had to break up with my boyfriend because he wouldnt put the toilet seat down. Still not sure why he started carrying it (Jessica Kennedy)
____ Our boss just banned the use of overly specific nicknames in the office, and now all my co-workers are glaring at Linda, the Bitchy Snitch Who Always Ruins A Good Time. (Steven Nibur)
____ Nobody cares what you're gonna do in 2015. Now post some nudes. (Victoria Beaver)
____ When I grow up, I want to be a... Huh? I am? Really? Oh. Sh*t. (Karanbir Singh Tinna) 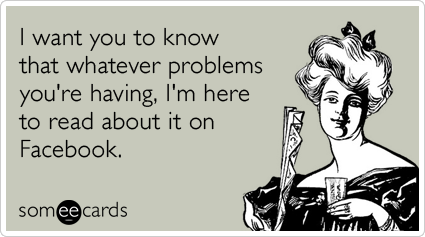 ____ Even Adolph Hitler had a girlfriend. I'm officially less desirable to women than Hitler. (Sean Shipley)
____ My boyfriend said he's ready to walk down the aisle. Sent him grocery shopping. (Jody Ann)
____ I wonder how many people read my statuses and say "I hope he's getting professional help"? (Javier Spartikus Malave)
____ When my baby poops her pants, it's no big deal, but when I do it, everyone starts passing judgment. (Stacy Jane)
____ I just moved from the couch to my bed. Exercising is hard. (Chris P. Bacon)
____ Amok is the only way I run. (Seb Diesel)
____ Just got asked to promote something on Facebook. I laughed. My friends would hate that! I was so mad I had to cool down with a Pepsi™. (Karanbir Singh Tinna)
____ Good news: I finally got my computer connected to the wireless printer. Bad news: not sure which house I need to go to get my documents. (John Geiger)
____ And today I learned to never ask a woman how she dye's her roots black. (Beau Diggity)
____ Is it just me, or is waking up at 4:40am and trying to read a text basically like looking directly into the goddamn sun? (Steven Nibur)
____ Talking to women is really easy if you just ask them how they're feeling then shut up for 3 days while they explain. (Karanbir Singh Tinna)
____ Priests who battle Satan make a resolution to diet and...EXORCISE! No, YOU shut up! (Mark Andrews)
____ To the guy wearing the Superman t-shirt. LOL. Way to blow your identity idiot. (Tyler Kattrein)
____ Wow, I lost 8 pounds this week! I have no idea where I put that gallon of milk. (Clay Pidgeon)
____ A wedding is like inviting your family and friends to the dock to watch you leave England on the Titanic. (Karl Lee Tate)
____ Kids and leggings always tell the truth. (Kristen LeMoon)
____ I'd like to have a child one day. Two days, tops. (Karanbir Singh Tinna)
____ ANOTHER FINE DAY RUINED BY RESPONSIBILITY. (Donnette Strukl)
____ I'll see your hangover and raise you a hysterical 2-year-old who dropped his ice cream. (Long, Wide, and Thick)
____ I found out why I'm still single. Apparently, you have to go outside and let people see you. (Sean Shipley)
____ I had my appendix taken out as a child. They said it was useless, but based on my life since then, I'm guessing it controls motivation. (Tyler Kattrein)
____ In a survival situation, you can drink your own urine. Fortunately, my Wi-Fi came back on just as I was filling the can. (Joey Guy)
____ You don't know broke until you've rinsed off a paper plate. (Imraan Jussab)
____ When I was 7 years old, a bear told me that I was the only person who could prevent forest fires. Why that bear chose me I will never know, but honestly it has been a huge burden I've had to live with for many years now. (Steven Nibur)


In January of 2015, there were several funny status updates that poked fun at the Facebook privacy thing. Here are two of my favorites:

____ I HEREBY GIVE MY PERMISSION to the Police, CI5, the NSA, the FBI and CIA, the Swiss Guards, the Priory of Scion, the inhabitants of Middle Earth, Agents Mulder and Scully, the Goonies, ALL the Storm Troopers and Darth Vader, the Mad Hatter, Chuck Norris, S.H.I.E.L.D, The Avengers, The Illuminati, The Men in Black, X-Men, Ghost Busters, The Justice League, Gandalf and Dumbledore, Santa Claus, the Easter Bunny and all the members of Van Halen (even Sammy), Voltron, The Shirt Tails, the Thunder Cats, Dr.Who, Hart to Hart, Mystery inc. (Scooby Doo), James Garner, Angela Landsbury, the WWF, EPA and even Magnum P.I. He-man, Jay and Silent Bob, Cheech and Chong, Neo, the Boondock Saints, and Batman, to view all the amazing and interesting things that I publish on Facebook. I'm aware that my privacy ended the very day that I started Facebook. (Jack Thomas Jr.)

____ I hereby state that I am a beautiful, glittering pony, with the silkiest of manes and delicate, manicured hooves and long luscious eyelashes. Furthermore, I unequivocally restrict the right of wizards in Facebook's employ to cast any sort of binding or damaging spell on my person or any of my intellectual property. Should I become involved in a copyright dispute with the Dragon King, I expect my Facebook friends to ride, fly, swim, run or whatever immediately to my aid, crossing high mountains, deserts and seas, abandoning their work, their play, their families and their significant other commitments without a moments pause.
Feel free to copy and paste this as your status, this will place you under the protection of the Seven Goblin Princes in Perpetuity (please renew your subscription after 1 year). As an added bonus (for the first 50 sign-ups), the goblin princes will explain to you free of charge that a status update has roughly zero legal effect on anything that Facebook, or anyone else who messes with your data, so nanny nanny boo boo. If you choose to bare your soul and tell us all your secretest things then post it on Facebook, or if you don't so choose go ahead, bottle it all up and quit whining. The choice is yours my friends. (Jim Cole) 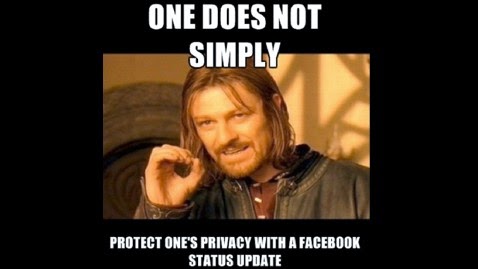 If you haven't visited MY STATUS IS BADDEST on Facebook, you're missing out! See what others are saying about their experience!

____ Me: I want my life back. MSIB: Nope. Me: Ok, just checking. (Karanbir Singh Tinna)
____ MSIB: Helping you realize the people you know aren't as funny as the people you'll never know. (Javier Spartikus Malave)
____ MSIB is easy. You just type into this little box here and then stare at your screen until you die. (Karanbir Singh Tinna)
____ MSIB has taught me that homicidal maniacs need social media too. (Javier Spartikus Malave)